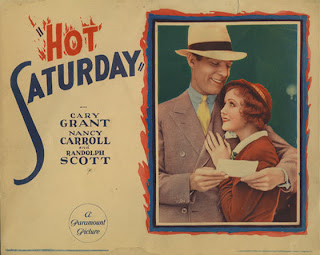 For years, Cary Grant was my favourite film star and one of the idols of my formative years. I watched all his movies that appeared on television and feverishly read any biographies I could get my hands on. After a while the new films to watch dried up so I rested him for a few years and moved on in other directions. Recently I’ve returned to him, filled all the gaps in my collection and then watched a number of his films only to find that…well it’s not the same. For reasons that I haven’t yet fully understood, I’m not enjoying his movies as much as I used to and most of the ones I’ve viewed lately, whether they were good films or bad have left me a little disappointed by his performance (for the record these films have been When You’re in Love, Kiss Them for Me, Wedding Present, I’m No Angel, Only Angels Have Wings, Holiday and Indiscreet). While Cary Grant is still the benchmark in my life when it comes to sartorial elegance and gentlemanly conduct, I’m finding that there’s just something missing when I watch my former favourite on the screen. He’s just not matching my memories from when I was younger. What’s wrong with me, am I ill?

Which brings me to Hot Saturday, currently the earliest performance of Cary Grant that I’ve seen (actually I’ve watched Singapore Sue but that doesn’t really count). Though top billed, he’s not really the star as that honour belongs to Nancy Carroll. She plays Ruth Brock, a pretty girl in the sleepy small town of Marysville who regularly has to fight off the attention of the bored young men at the bank where she works. She meets local playboy Romer Sheffield (Grant) who invites everyone down to his house for a party, the ‘Hot Saturday’ of the title. From there we get the usual melodrama of love affairs and misunderstandings with the main message being the petty-mindedness of small town gossips as Ruth becomes a scarlet woman due to her carefree attitudes. There’s quite a lot to talk about in the film (short version: Nancy Carroll does a ridiculous Lillian Gish impression, lots of underwear on show gratuitously, Randolph Scott undressing an unconscious woman in a cave and a hilarious turn from Grady Sutton) but just this once I’m going to ignore all that and talk about one aspect, the aforementioned Mr. Grant.

Cary Grant’s character in Hot Saturday is interesting as not only is it his first leading role but possibly his first excursion playing the “Cary Grant” character that he would go on to perfect, both on and off screen. Here he hasn’t quite figured out the formula. As Sheffield he is charming and romantic but with an altogether harder heart. For example, at the start of the film he pulls up outside the bank with his current girlfriend, who is promptly dispatched with once Nancy Carroll becomes the new object of his affections (complete with monetary pay off). When he asks his servant if she has left a message for him, the reply is “..she said you can go to h...the devil”. Sheffield is obviously a worldly-wise character with a long line of female conquests to his name.

You get the feeling with Grant in this picture that he is still finding his way in this sort of role, still piecing together his screen alter ego. At his party he’s decked out in boating whites and blazer, and walks around with an almost Gatsbyesque air of bored detachment (everybody is enjoying the food and drink except him). When trying to woo Nancy Carroll the words sound lovely but the delivery is hesitant and at times empty. He also has that strangely toothy and feminine smile that he only seems to have in early portrait pictures. It’s almost as if he hasn’t even grown into his face either. He’s not helped by a lack of close ups and some bad continuity throughout the film as he sports a healthy and deep tan in some scenes, only to have the white pancake makeup on in the next. It’s an altogether stuttering start for the local lothario.

Despite these teething troubles, his character certainly shows the suave arrogance of a true cad to match his detachment. After trying his best pick up lines on Carroll at the party, he emerges hand in hand with her in full view of her current beau as if to highlight that he is used to women falling into his lap regardless of their existing relationships. Later in the film when Carroll appears at his house late at night we find the young playboy lounging about on his porch in his smoking jacket. He seems unsurprised to see her and admits that when he saw her he knew he had to have her. When Carroll talks marriage he replies “Marriage…ownership...dreadful thought isn’t it?” He has the casual attitude of a bored playboy who is used to living his life the way he wants and used to getting what he wants, and usually through money. This is scripted without a trace of emptiness on his part - up to this point money has bought him happiness. Though it’s early days, this embryonic version of the ‘Cary Grant’ character is with hindsight quite troubling. After all, Cary Grant without a heart, without a sense of compromise, without the ability to be ridiculous and self depreciating is, well…you can fill in the name of your least favourite leading man if you want to be cruel.

Luckily by the final reel Cary has a sudden change of heart and starts to really look a bit more familiar to our modern eyes. When informed that Nancy Carroll is due to marry longtime friend Randolph Scott he accepts the news with disappointment but also grace and gallantry (and all while impeccably dressed in a tuxedo). It’s an unexpected admission for a man who gets everything he wants that he has lost for the first time in his life. However, this in turn leads to the frankly unbelievable ending where Carroll decides to run off with Grant and get married. Yes, faced with scandal and ruin, she sides with the home wrecking cad. Worse still, he goes along with it - what happened to all that dreadful ownership stuff?

Hot Saturday is interesting for what could have been had this character emerged as the template for Cary Grant’s screen persona. Though his character had a somewhat ambiguous morality, I can’t say I enjoyed his performance and I wouldn’t say that it is in any way a star making turn, though these days it’s impossible to put yourself in the shoes of a viewer seeing Cary Grant for the first time. I’m afraid that for me the movie continued the run of under whelming performances by Grant. What’s interesting is that the suave playboy he portrays in Hot Saturday certainly lacks ‘something’, with his empty words and arrogance. Of course, that ‘something’ is the special magic that Cary Grant eventually brought to his roles as a star, that unique charm that made him stand out from the crowd and made him my favourite actor for so many years. It’s strange watching him in the process of finding that magic and seeing him misjudge a few steps on his way to creating one of the most enduring and popular characters in film history. I guess I’ll have to find a way to reconnect with Cary Grant with the next film I watch…
Posted by Russell at 16:06