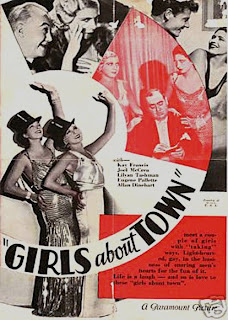 Girls About Town is one of those pre code films that deal with a somewhat undefined sense of morality. The girls in question are Kay Francis and Lilyan Tashman, and the town is well, any town though strangely they spend a lot of the film on a boat. The two stars play a couple of gold diggers who spend each night taking out wealthy businessmen to show them a good time on the town. For giving the men this service they get well paid by the mysterious “Jerry”, their agent of sorts (well that’s a polite word for it). Unsurprisingly this set up is never called into question, and “Jerry”, if indeed that is his real name, manages to sleep well at night, his conscience untroubled. The two girls live together in their plush apartment on the money they earn for their “services” and the “gifts” they procure from the various middle aged men they have wrapped round their little fingers. They sleep during the day, go out at night in their finest clothes, party the night away, only to return early the next morning to bed for the cycle to begin again. Of course this being the 1930s the question of sex is never mentioned, and in this case never even hinted at, but their lifestyle was certainly something that wasn’t going make the Catholic Legion of Decency too happy.

The basic theme of the movie is how far you can take the gold digger lifestyle and whether it truly buys you happiness. Of the two girls Marie (Tashman) is more concerned with wealth and what she can get from people, but Wanda (Francis) is beginning to have doubts and wants to settle down. From there we get the usual twists and turns of melodrama, action and comedy with a fairly sharp script from silent film star and soon to be successful producer Raymond Griffith.

The film, directed by George Cukor begins at a breakneck speed with a clever title sequence that has the stars’ names in neon lights over city scenes of buildings, bright lights and merriment. We then get a dizzying montage of the girls taking out some clients, with fast cuts to the faces as the girls pretend to look interested and the men get more and more drunk, while champagne bottles pop their corks over the picture. As far as setting a scene and getting you straight into the story and its characters it’s about as effective as you will ever see and highlights the great economy of script and scene used in the films of this era (the film itself is a snappy 69 minutes). After this a tracking shot of the girls’ bedroom showing the effects of the night before brings the action up to date. I’ve never been a huge fan of Cukor but it’s an impressive start.

The girls get the call from Jerry and go to a boat for their next assignment, entertaining a businessman and his assistant, played by Eugene Pallette and Joel McCrea respectively. From here Tashman pairs up with Pallette to milk him of his money and Francis falls in love with McCrea. Although the film starts promisingly, it soon starts to get a bit patchy, mostly because it doesn’t know whether it’s a light comedy or a full blown Kay Francis style melodrama. Both are good in their own way, but sandwiched here side by side they don’t quite add up.

On the comedy side we get Lilyan Tashman’s exploits as she tries to get practical joker (and skinflint) Pallette to part with his money and jewels. Eugene Pallette is particularly good as the annoying prankster (and since this is the earliest of his films I’ve seen is considerably thinner and less raspy throated than I’m used to) who regales everyone with stories of the awful jokes he’s pulled, especially savouring the poor woman who “got such a surprise she fell and hit her head on a chair”. Tashman goes all out to get the money, eventually involving his wife, a bit of blackmail and a sort of happy ending. This plot line possibly could have supported the movie on its own with plenty opportunities for Tashman to swindle the money and get one over on the stingy businessman.

However, we also have the Kay Francis storyline to deal with. Kay looks wonderful throughout the film, positively glowing with glamour (though as usual perhaps just a little too much eye make up). Her story involves her love affair with Joel McCrea (who really doesn’t do much to stand out in this movie) and the sudden revelation that “I haven’t lived the prettiest life in the world” and that shock! she’s already married! and that shock! her husband is also married! This bigamy (and subsequent blackmail) sub plot just comes out of nowhere and isn’t in the least bit convincing. However, it is introduced in a very subtle and clever manner. Kay phones her estranged husband, and as they talk we slowly see a woman’s leg in the background hanging off the edge of a bed. After the call the brief conversation between the two lets the viewer in on the secret shame. The sad thing is that Kay levels this announcement on poor Joel while at the zoo. They had been happily poking the rather circus like cages full of sad looking bears and monkeys, and he had even bought her a nice balloon, before getting slapped in the teeth with the “but I’m married!” speech. The moral: never go on a date with Kay Francis. you'll buy her a balloon and this is how it will end.

So the trick of the film is to draw these two plots together and sadly it just doesn’t quite work. The other problem with the film is that of Lilyan Tashman. While she is undoubtedly very good and very funny in the movie, she is seen only in contrast to Kay Francis’ gold digger with a heart character. It’s almost as if she has decided to harden her character to differentiate herself and the result is at times too severe. Even though she helps get a marriage back together at the end, she is still too mercenary (and unrepentant) to be wholly sympathetic. Perhaps it’s her face, which is better suited to portraying frosty other women or society dames (as she did wonderfully in The Marriage Playground). An actress like Glenda Farrell would have been more suitable for the role and able to bring some more warmth to a funny but potentially unlikable character. However it’s only a minor quibble as Tashman, regardless of how she plays the role is full of energy and her contribution to the film is far more interesting than the drippy melodrama of the Kay Francis story.

That said Kay Francis is also excellent in her role. She seems most at ease with the comedy and gives the impression (at least at the start) of being a happy and carefree girl about town, resplendent in shiny gowns and fur coats. As expected the bigamy subplot all works out in the end and we get our usual pre code cop out on any truly scandalous behaviour. What is worth mentioning however is the film’s one real pre code moment where, fresh from a dip in the sea Miss Francis proceeds to do a scene with McCrea in her soaking wet and completely see through white top. I was actually shocked that they left the scene in and didn’t think to cover her up, for her own modesty as much as anything. I guess it helped to sell tickets, in fact I’m sure it did.

Essentially the film is all good clean fun under the pretense of being a bit risqué. It’s unusual that these sorts of morally dubious female characters frequently haunt films of the pre code era, and more so that their lifestyles are usually held up to be something to aspire to or at least sympathize with. The popularity of the “gold digger” character shows that the audiences of the Depression wanted to see women claw their way up the rungs of society by using their sex appeal and street smarts to their advantage. Whether it’s exploitative or empowering is difficult to say but the sheer style of the string of actresses who played these characters at least makes it entertaining and palatable regardless of morality and after 1934 it would quite a while before women would get to enjoy themselves as much on screen.

Girls About Town is an interesting and engaging movie that nonetheless leaves the viewer uneasy as to where their sympathies should lie. Should we applaud Lilyan Tashman’s character for living the high life and getting what she can out of others with no guilt or remorse? Or, as Kay Francis notes as she tries to seduce an unwilling Joel McCrea, is it all okay if it’s only pretend? The movie is certainly amusing and full of life but the hard edge of the girls’ essential selfishness left much of the film and its characters in a moral fog. Of course this in itself is quite refreshing as there is little outright moralizing (other than that of the sanctity of marriage) but the tone just doesn’t fit the action. And what’s more, we never did find out who Jerry was or why he’s not been arrested because I'm sure what he's doing is illegal…