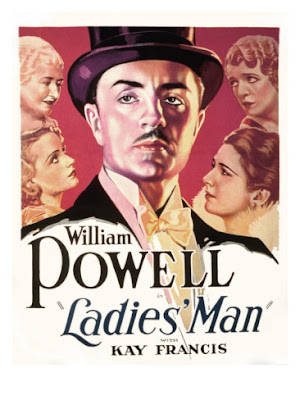 What is it about?: A notorious society gigolo wines, dines and beds a wealthy socialite and then her daughter but finds it difficult to escape the consequences of his lifestyle when he meets someone he really loves.


Behind the Camera: Directed by Lothar Mendes, Screenplay by Herman Mankiewicz from a story by Rupert Hughes, Cinematography by Victor Milner


Snapshot Thoughts: Ladies’ Man is a fairly routine and static melodrama whose main selling point is its rather sordid story of Pre Code loose morals. William Powell plays Jamie Darricott, the titular ‘Ladies’ Man’ (the film’s euphemism for gigolo) who is the escort of choice for middle aged socialite Mrs. Fendley (played by Olive Tell). Mrs. Fendley is rich and bored, as her husband is too busy making money to take her to the opera and go to parties with her. The perpetually jaded looking Jamie fulfils his position with a resigned stoicism due to the fact that it provides him with money to keep up the pretence that he is a gentleman. A complication arises when Mrs. Fendley’s young daughter Rachel (Carole Lombard) falls for Jamie and he obliges to her overtures, creating an odd ménage a trios between mother, daughter and gigolo that is mildly distasteful even in the context of Pre Code bad behaviour. Jamie eventually meets Norma Page (Kay Francis), a fairly normal woman and they start a relationship while Jamie attempts to extricate himself from the entanglements of his profession and start a new life with Norma.

From that brief synopsis we find a movie shrouded in a bleak air of tragedy where death constantly lurks. William Powell plays the part of Jamie in the restrained manner of a man married to his fate and tired of life. In Mrs. Fendley’s home he admires portraits of Catherine the Great and her lover the statesman Grigory Potemkin (I love how 30s films continually throw in these historical references assuming their audience knew full well that they were talking about. I wonder how many did? I had to look it up). They talk about how Potemkin ‘had to die’ for loving Catherine but that it was ‘a glorious death’ for such a love. The relationship is brought up several times throughout the film to remind us that following your heart results in death.

Jamie finds something to really live for when he meets Norma, but we know full well it is doomed (and if we didn’t, the fact that Mrs. Fendley and her daughter both proclaim that if Jamie doesn’t marry them they will kill him kind of gives it away). At this point we are supposed to feel some sympathy for Jamie’s dilemma, but it’s really difficult not to think he has willingly and selfishly brought it all on himself. Meeting Norma may have made him see the light and experience real love but he is still unrepentant for his lifestyle and prefers to blame busy husbands for creating the bored wives that provide a living for him. It’s a testament to the screen persona of William Powell that we feel anything at all for the cad. 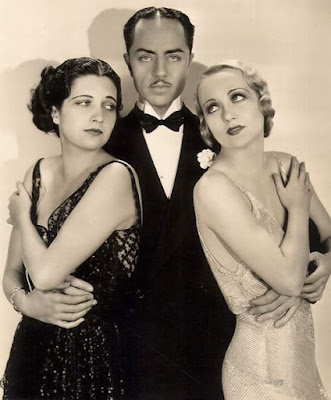 Star Performances: William Powell is his usual excellent self and without him the movie would be like watching paint dry. He portrays Jamie Darricott as a world weary, fatalistic traveller who is constantly aware that his life can only end with premature death. Unfortunately at times he is often too world weary which hurts the picture when the poor dialogue and somnambulant pace really require a jolt of energy and movement. Powell is good in the film but the restrictions of the part really limit his ability to give his usual warm, assured performance. Kay Francis, still a few films away from stardom gives a rather charming performance as Norma. She is likable and feisty despite her motivation being questionable (why exactly is she with him?). Unfortunately she serves merely as window dressing for many of her scenes, standing or sitting silently while other characters move the plot on. However, it’s definitely a positive appearance for her, and she has future star written all over her. Speaking of which, the third part of the triumvirate of dream casting in the movie, Carole Lombard acquits herself well as the highly strung daughter Rachel. It’s not much of a part and indeed her character disappears two thirds of the way through the movie but she shows poise and charm. The scenes where she is blind drunk and acting alternately silly then threatening are particularly good. Finally, plaudits must also go to Olive Tell as the bored society wife who starts the whole sorry mess. She looks and sounds like the typical middle aged socialite of so many classic movies, yet instead of being shocked at immoral behaviour, she is the one instigating it. It’s an interesting role for her that continually plays against type.


Technical Excellences: There’s not much to report here sadly. The direction by Lothar Mendes, is flat and uninspiring. The fact that he had previously worked with William Powell and Kay Francis several times seems to made no difference to the quality of their performances and the generally static visual style. Looking at his other directorial efforts of the period, this seems to be his characteristic style and generally his films rise and fall based on the script and the charisma of the actors. Sadly here, neither are particularly inspiring, with Herman Mankiewicz’s script delivering some of the most stilted and dull dialogue imaginable. On the plus side, there are some lovely sets, particularly the hotel lobby set and the various society balls portrayed in the film look like they take place in some suitable grand surroundings. However, the flat direction generally reduces such scenes to vacant wide open spaces. 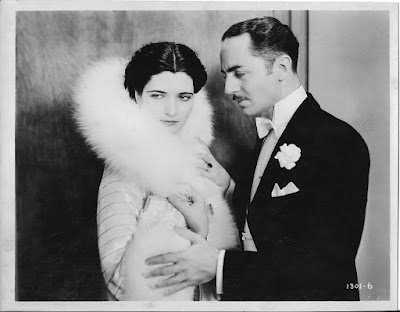 The Sublime: The best bit of the movie is it’s finale, where Mr. Fendley finally confronts Jamie about his dalliances with his family as a costume ball is about to start. After a brief scuffle, Jamie falls to his death from the hotel balcony and Mr Fendley takes his place leading the procession at the ball. He walks with his wife as it slowly dawns on her what he has done, his eyes glazed over as the police arrive. It’s a really strong ending which in the hands of a better director could have been a powerful scene of celebration slowly descending into tragedy as the truth dawns on all involved. As it is it’s still good, and capped off by Norma crying in the corner if the hall as the dance begins. A policeman says to her “Were you in love with him too?” and in a classic piece of Kay Francis tragedy she tearily replies “You don’t have to feel sorry for me. He loved me. They can’t take that away from me!”. She gives the camera a desperate, hysterical look as the film ends, safely chalking up another entry in the Pre Code book of miserable downbeat endings.

The Ridiculous: Kay Francis’ fashions. I don’t know who was responsible (sensibly the guilty party is left off the credits) but she wears some truly ridiculous outfits in Ladies’ Man. First off she has a hand muff in the hotel lobby that is the size of a baby seal (it may actually be a baby seal). It’s so big it takes up most of a coffee table and provides a useful ice breaker for Jamie to talk to her. Maybe that’s why she was wearing it as it’s really difficult to miss. The film’s designer then strikes again when it come to Kay’s evening wear. She wears a fur coat that looks like a stuffed and mounted poodle lives on her shoulders complete with a collar that even Liberace would say “No, too much” when asked to wear. And after that there is her dress. Wow. It’s a white (I think) number with polka dotted shiny things on it that may or may not be bits of foil taped on, or the entire 1931 supply of rhinestone, it’s difficult to tell. It also seems to have bits that hang off it and move about and basically it is a mess. From a distance it looks like a landing strip for a flying saucer. If you need to see this film, if you really need to, it should be to witness this monstrosity of misplaced glamour. No wonder everyone at the nightclub was drunk - one look at her ensemble and they were three sheets to the wind. 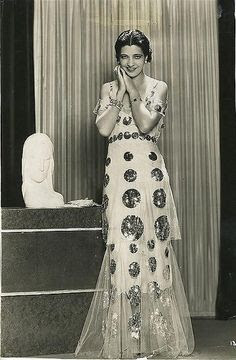 Is it worth watching?: In a word, no. Unless you are a hardcore Pre Code fan and have to see everything, I wouldn’t recommend it. It’s the sort of film that is interesting as a glimpse of the average filler material thrown out to a public demanding constant product. Not every film was a priority and contracts had to be met so the result is a movie like Ladies' Man. It takes a well known star, a couple of up and coming players and some veterans then throws together a bunch of ‘scandalous’ tropes involving sinful behaviour. Add some melodrama, a contract director and mix. Quite watchable, with hints at greater things but ultimately average and uninspiring. It’s the sort of picture that filled up the bill of an evening’s entertainment and was then instantly forgotten. And let’s face it, there’s nothing wrong with that.

Of course, with that said, if you are true connoisseur of 30s high fashion and impeccable glamour then Ladies’ Man is one of the greatest films ever made.


Random Quote: “Women are always waiting for someone, and then Mr. Darricott comes along!”
Posted by Russell at 20:43 No comments: