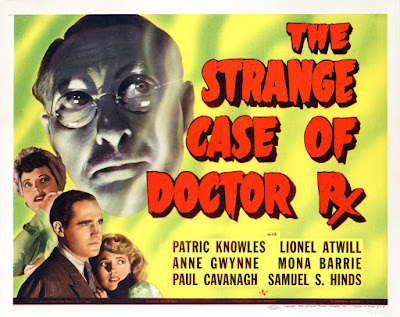 The Strange Case of Doctor Rx is a decidedly lesser entry in the Universal horror and mystery cycle and one which pretty much deserves its obscurity. It’s a tale of avenging justice gone wrong, as our titular doctor embarks on a gruesome killing spree of recently acquitted criminals. As the bodies pile up, the police and private detective Jerry Church race against time to find the culprit’s true identity. As a brief plot synopsis the story sounds fairly interesting, but in execution the movie is anything but. What could have been an engaging whodunit is marred by the inclusion of far too many characters, a romantic subplot that descends into endless quarrelling, an all too obvious red herring and generally just far too much talking to pad out the film’s paltry 62 minutes.


By the time the mystery is solved, it’s difficult to care who Doctor Rx really is, let alone why he has been bumping off criminals. In fact there is instead a lingering resentment that he didn’t get his act together and kill off most of the cast to spare us the endless talking and bickering. So, you may ask, why am I bothering to write about such an average and uninspiring little pot boiler of a movie? The answer is simple - the inclusion in the cast of a certain actor who singlehandedly makes the movie worth watching, one Mantan Moreland. It’s been a while since I’ve had cause to write about Mantan but if ever there was an example of his unique charisma and innate ability to rise above mediocre material, it’s his performance in The Strange Case of Doctor Rx.


Here, Mantan Moreland is billed ninth and not even included in the opening credits, only the closing ones. Yet despite this he has more screen time than practically any character other than the two leads, Patric Knowles and Anne Gwynne. Sadly, one can only draw an obvious and disappointing conclusion as to why this is, and it is certainly a far cry from his featured billing while working at Monogram. Moreland, true to form for black actors in Hollywood in the 40s, plays the lead character’s manservant, but thankfully this time his role is extended beyond mere (ahem) stepping and fetching. His character, Horatio B. Fitz Washington is an interesting precursor to the role he would become most famous for, that of Birmingham Brown in the Charlie Chan movies starting in 1944. Here he is somewhat braver than the usual stock African American servant character, and despite being loyal to his ‘boss’ still gets a few good one liners in response to Patric Knowles’ at times obnoxious and unlikable character. There’s an obvious influence in the development of these sort of roles in the popularity of Eddie Anderson as Rochester in the Jack Benny Program on radio, though I don’t doubt for a minute that Mantan Moreland getting this kind of part has just as much, if not more to do with Moreland’s own  comic gifts. Nevertheless, it’s always good to see him get a lot of screen time, even if this was only ever to happen in B movies. 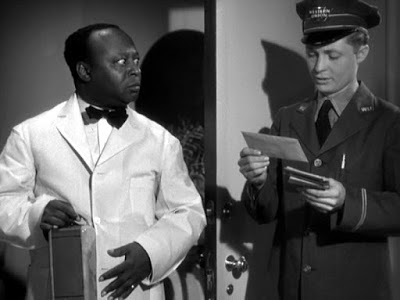 As mentioned, the film itself isn’t particularly memorable, and the script is fairly dull, but more than any other cast member Mantan Moreland wrings out every drop of potential in the bland words. It’s no exaggeration to say he steals every scene he is in and makes tired old situations at least vaguely amusing. He expertly manages to give his stock character a glimmer of an inner life just by his reactions and the small movements he makes. This is evident from his first scene where he answers the door carrying a radio (helpfully tuned to a news broadcast and filling us in on the plot) to get a telegram. The delivery boy asks whether Washington is a place or a name and Mantan snaps back “Ain’t you never heard of Washington? Ain’t you studied your history? You don’t know nothin’” , then proudly declares “That’s the greatest name there is!”. His indignant eye rolls and incredulity at the question show him to be a man of pride and despite being a valet, knows that even he is better than a no nothing delivery boy. As the scene goes on there’s a lovely bit of business as he stares at the delivery boy then makes out that the boy is looking at the radio, which he then protectively tucks under his arm. Moments like that can’t possibly be in the script but are the little details that Mantan adds to his performance which enable him to stand out in an otherwise run of the mill movie.
It really is the small details that make the difference all throughout the picture. For example, at one point he rushes to answer the phone then realises the receiver is upside down. It’s a quick moment filmed in a long shot so is not meant to ever be noticed but Mantan, ever the trouper, just adds it in to get a brief laugh. Similarly in a scene where he is talking to the police and realises there is a microphone in a nearby lamp, he tilts the lamp in their direction as they speak, but does it in a hilariously understated way that manages to be restrained yet outrageous. His method is to tilt the lamp in an exaggerated manner towards the talking cops while staring blank eyed and nonchalantly into middle distance. It makes a brief yet memorably odd visual and once again gets far more laughs that the script could possibly have managed as written. 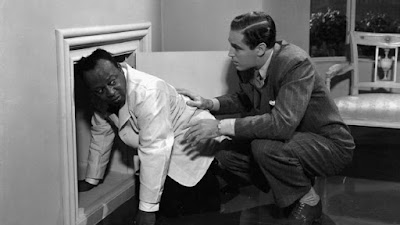 Possibly the highlight of the movie is the chance to experience a great bit of comedy dream casting as Mantan Moreland shares a short scene with the one and only Shemp Howard. Shemp, at the time firmly established as a reliable comic heavy and sidekick plays a dim witted police officer. Sadly all the potential in his casting is largely wasted as he is reduced to little more than reaction shots as others talk over him. However, in a brief comic interlude the two titans of character comedy finally meet and their timing and chemistry is a treat. The scene takes place in a kitchen and Shemp, seeing a bottle of booze asks for some (the only discernible character trait he has in the movie is that he likes a drink) but Mantan wants some money for it. Eventually he offers to roll dice for it, but Mantan firmly states that he doesn’t gamble. Shemp then pulls out the dice and Mantan gives a little high pitched wince and says “Oooh, on second thought maybe I might”. Again, while not particularly funny on paper, the scene has great energy from the two, with the rapid fire delivery and timing pitch perfect. Moreland’s pacing here is reminiscent of his cadence in filmed versions of his famous ‘incomplete sentences’ routine with Ben Carter in vaudeville. What’s interesting about both the performers is that they alternate at being the straight man and take turns to attempting to one-up the other. It’s one of those moments when you get to marvel at the ability and versatility of two seasoned comedians who know their own characters so well, just going out there and trying to get some laughs out of virtually nothing.


The end of the movie is its highlight (and not because it is finally over), as Mantan is kidnapped by the evil Doctor Rx to lure Jerry into his lair. At this point the film just suddenly throws everything it has at the screen and the now hooded doctor chains our hero to a gurney while attempting to transfer his brain into that of a large caged gorilla he happens to have as a pet. The fact that none of this is even hinted at throughout the preceding 50 minutes just makes it all the more mystifying, but at least it all goes out with a bang. Throughout this part of the movie Mantan Moreland does a commendably good job of playing it straight. His tired, sweating face and monotone voice make him look like he has been on the receiving end of some sort of torture and elicits genuine sympathy. His solemn phone call to Jerry under duress is perfectly judged, with the fact that he eschews the usual laughs making it all the more potent. When he is then forced to watch Jerry face the crazed gorilla, his horrified yet feeble cry of "Don't do that to my boss" immediately sells the seriousness of the situation. It's another testament to his likability that despite any racial connotations to the scene (a white hooded villain torturing a black man) it's more disturbing to see the effects of real violence on such a gentle man. 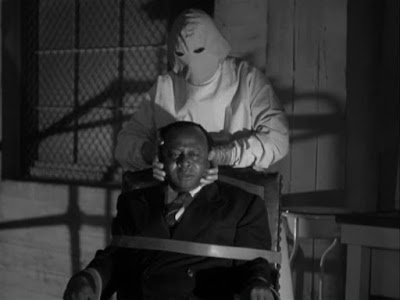 What strikes me after watching The Strange Case of Doctor Rx is that, if it were not already obvious the movie industry missed the boat massively on utilising the talents of Mantan Moreland. While I’m sure that due to racial attitudes of the day, a great many African American actors (and those of other ethnicities) were denied their chance to shine, in the realms of comedy especially, Mantan’s absence hurts the most. In a colour blind world, Mantan Moreland could have easily become a featured solo comedian, or at the very least part of a double act (a series of films with Ben Carter would have had potential). At an absolute minimum he should have had a short subject series for Columbia or RKO but it seems the world wasn't ready for it and our cinematic lives are thus poorer for it.
Mantan Moreland may have had expert timing and comic reactions, and years of stage experience to help him but what sets him apart from others so much is that he’s just so darn likable. He had a real and believable everyman persona, standing outside of society (where all good comedians do, regardless of skin colour) yet with an evident sense of self worth and value. He could be cowardly yet loveably pompous, street smart yet gullible and beyond the one liners and comic business was a fully formed comic original. Despite playing secondary roles for a lifetime, Mantan Moreland had the ability to make us root for him, to overcome stereotypes and displace prejudice with laughter. That alone should have been enough to make him one of the great character comedians of his time, but it was not to be. Luckily, movies like The Strange Case of Doctor Rx gave him enough screen time to show what he could do. And what he could do was outshine most of the cast and steal the whole picture from under them. Though, when you steal every scene you are in because you are just better than those around you, it's not really scene stealing, it's just called talent.
Posted by Russell at 15:13 2 comments: