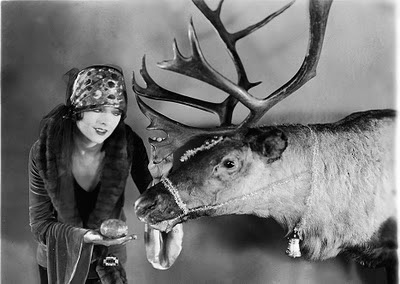 Well, it's Myrna Loy's birthday once again and even though I have quite a few Myrna articles planned in the near future I'm not nearly organised enough to offer something substantial, I'm afraid. Since my world shattering prose isn't quite ready, I thought I'd share with you my favourite ever picture of Miss Loy. I think Myrna Loy more than most, has a portfolio of the most gorgeous, interesting and downright unusual portrait photographs in all of Hollywood. No other actress experienced the extremes she did in her career: home-wrecking other woman to perfect wife, fiendish oriental vamp to all-American girl next door, bathing beauty to wild gypsy temptress, they are all there and more besides. And somewhere in amongst all these characters and all these beautifully poised publicity photographs, there is this - Myrna Loy feeding a decorative egg to a moose (or is it a caribou, or even a reindeer? I don't know much about these things, I'm afraid).

Regardless of the species of animal in the picture, just what exactly in the name of Asta is going on here? You know, this photo has haunted me for years. When I first saw it, the resolution wasn't too good and I convinced myself that she was dressed as a flapper, feeding wax fruit to a stuffed moose head. I concocted an imaginary storyline in my head to explain what the photo was all about (something about a game of hide and seek at a society party that ends in murder - trust me it was the greatest film never made). Anyway, I let it hang there and percolate for a few years until a while later when I saw a better copy of the picture. It turns out it's a real moose/reindeer/caribou and she's actually feeding it what looks like a painted egg (a Faberge egg maybe?). She's dressed quite modern, though the head scarf has a touch of the gypsy in it, so I only got pretty much every major detail of the photo wrong, which doesn't say too much for my observational skills.

Of course, none of this explains what exactly is going on. And, can I just ask - what exactly is going on?? It doesn't seem to be a still from any film I've seem. It certainly seems to be early in her career, possibly during the late 20s and her exotic phase, but past that I'm stuck. If anyone out there knows the background to the photograph, please let me know as, hopefully I can get some answers and someday...someday, move on with my life. If not, I'm afraid I'm doomed to wander this earth feeding decorative eggs to antler sprouting mammals and let me tell you, so far the results haven't been pretty....

However, despite my odd fascination with this photograph, the real point is that there are always weird and wonderful films stills of Myrna Loy to be found depicting the many facets of her career, and it's one of the reasons I do find her rather wonderful.