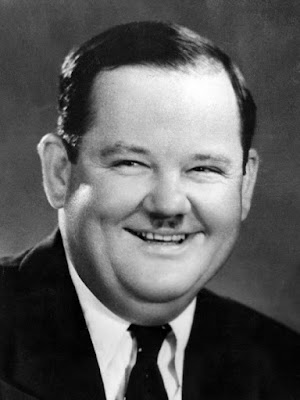 A couple of years ago I wrote a short piece on the occasion of Stan Laurel's 120th birthday. I mentioned my eternal gratitude to him for all the laughs he has given me and that if it were not for him, I would not be the film fan (or the person) I am today. Of course, Stan deserves every plaudit he receives, but he would be the first to admit that all those accolades need to be equally given out to Oliver Hardy. When I was a child, Stan was my favourite and he made me laugh until I was sick with his clowning. My dad would always tell me that Ollie was his favourite and he would try unsuccessfully to convince me that Hardy was the real funny one, not Stan. Of course, we were both right and wrong. Stan and Ollie can't be viewed separately, they are entwined forever, parts of an infinitely funnier whole. However, one thing has changed as I have gotten older - I have taken my father's advice and now spend most of my time (as Stan did), just watching Oliver Hardy and his pitch perfect comic timing. His expressions, body language and mannerisms are an exquisite thing of beauty, a talent so expertly judged that it is at times breath taking how good Hardy is as a comic actor. He is the glue that holds the partnership together, and in his soulful eyes and gentle voice is the heart and soul of the duo.

Yet despite all this, what really makes Oliver Hardy a true screen immortal is 'the look'. It's often just a simple, incredibly brief raising of the eye and the tiniest glance at the audience but it's enough to make all the difference. Once you catch it the connection is made and throughout the Laurel and Hardy movies, Ollie will forever become your guide through the many trials and pitfalls of life with the two friends. Hardy’s glances at the camera probably started in an effort to highlight the roles each of them often play – that of Stan the child and Ollie the exasperated parent but they ended up becoming so much more. Of course their actual roles are more complex but it’s interesting (and perhaps a reason for their longevity) that children watching tend to identify strongly with Stan then grow up to be adults their own responsibilities that Ollie represents. Whereas Stan wanders through life aimlessly, following in the footsteps of his pal, it is Ollie who tries to better himself by his misguided attempts to integrate with everyday society, whether it be marriage, a job or a new skill. Ollie tries to be a successful adult but due to a combination of Stan’s ineptness and his own ego, he always fails. And that is where his look makes all the difference. 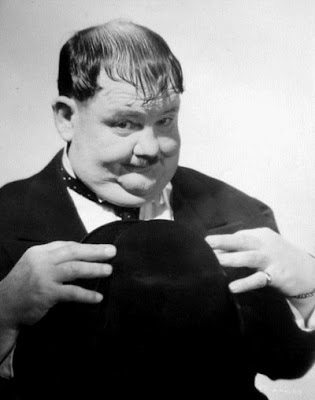 Surely there is no one in screen history that can cause accidental destruction on a scale with Ollie (of course all triggered by Stan first). Ollie doesn't merely slip on a bar of soap and fall over, he slips, stumbles and falls on to a bed which violently collapses causing a tremor which brings down all the fittings in the room with a near explosion of chaos. Ollie doesn't merely get his feet wet in a puddle, he falls down a six foot hole that the puddle disguises (Stan walks though undisturbed, obviously). And when Ollie falls down a chimney, there's always an endless supply of bricks waiting to fall on his head, seemingly suspending the laws of physics especially in order to extend his suffering (and there's always one last brick when he thinks it all over). Simply put, often through little fault of his own Ollie is a walking disaster of epic proportions. It's cruel but his plight makes us laugh, such is the way of slapstick. However, as we watch him flounder, Hardy pulls one of the most singularly brilliant and audacious comic touches in motion picture history, he looks back at us.

Better writers than me could probably wax eloquently all day about the emotions contained in one of Ollie's looks to camera. Suffice to say, there is a lot of variety in his looks - he uses different ones for different situations (one of the best is after Stan says something nonsensical, he tends to do the briefest of double takes, with his eyes! Try doing that in front of a mirror). The most affecting though, happen after one of his frequent falls down a chimney/out a window/out the side of a boat/ down a large flight of stairs etc. He stares at the camera, and in that brief intimate moment we truly feel his pain, his frustration and most of all his essential goodness. It's a wonderful connection that just extends the field of goodwill that Laurel and Hardy endlessly project and makes me love them even more. Ollie's desperate glances may convey momentary exasperation with Stan, but we know that it is temporary and their friendship will be repaired in no time (or until the next mishap). 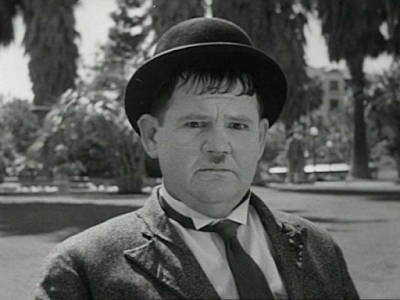 It's been said many times how the humanity of Laurel and Hardy is what sets them apart from all other comedy teams. There is a graciousness, a respect and a real affection between the two friends, and as someone once said (it may have been John McCabe), they really are two gentlemen and 'gentle men'. A huge part of the believability of this relationship was of course the real life relationship between the pair, but to me it's always been Ollie and his weary looks to the audience that made me truly understand their humanity. They transcend the decades, and bring us closer to these two funny men from a time before any of us were born. And as I mentioned earlier, this is all a testament to Hardy's beautiful timing and unparalleled ability as an actor.

As Kurt Vonnegut once remarked "There is terrible tragedy there somehow. These two men are too sweet to survive in this world". This could be true but Ollie takes the burden of worry from us, looks back at us for a brief moment, then gets back up, puts on his battered bowler hat and starts all over again. He is reassuring us that things are alright, and indeed we all feel better for it. His look is a beautiful, sincere gesture from a talented comic master. For all that Stan Laurel means to me, Oliver Hardy means just as much. Comedy, tragedy and humanity are hard skills for most actors to master but Ollie can do it with a look. Just watch for that final brick though...
Posted by Russell at 17:17 No comments: