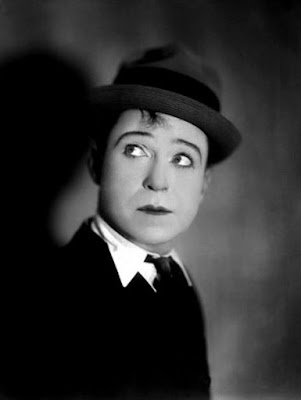 It’s not often that watching a film for the first time leaves me with a range of conflicting thoughts and emotions but Three’s a Crowd did exactly that. The thoughts and emotions in question stretched from shock and confusion to awe and admiration regarding what exactly I had just seen. And what exactly did I see? Well I’m still not entirely sure, but after mulling it over I thought that I’d make an attempt to share my thoughts on Harry Langdon’s much maligned directorial debut.

Rather than subject the world to another extra long movie review, I’ve opted to split this into a couple of shorter, more manageable parts, and I’ll start off here by looking at the background of the film and the story of its making, and its role in the subsequent unmaking of Harry Langdon. Three’s a Crowd, long unavailable for general viewing was released by Kino on DVD (as a double feature with Langdon’s follow up The Chaser) in 2008 and I’d heartily recommend picking it up. Simply put, regardless of critical opinion, Three’s a Crowd is unlike anything else Langdon or indeed any of his contemporaries would ever attempt.

To say that Three’s a Crowd is a polarising movie is a bit of an understatement. The film, its production and subsequent fallout has inspired fierce debate for decades. For the most part, the general critical consensus was that Harry Langdon’s first directorial effort is an artistic disaster, an ego driven misstep of such magnitude that it cost the comedian his career. Split from his collaborator Frank Capra, Harry Langdon was out of his depth and proved once and for all that he needed others to create the comedy for him. As a result of this tide of opinion, there is so much baggage attached to any viewing of the movie that it is often hard to see it untangled from its difficult genesis and the decades of critical mauling.

So I decided to finally watch this most unloved of movies and see for myself. After not laughing much in the opening ten minutes, I feared the worst and began to feel a dreadful sinking feeling. Were the critics right all along? Did Harry really just not understand his own character? Slightly worried, I kept watching but with my expectations lowered and now hoping for at best an amiably average little effort.

It took a short while for the movie’s dreamlike atmosphere to take hold, but once its fog of discord had seeped into my mind I was completely under its mesmeric influence. I went back and watched again from the beginning but now with my eyes open and a new found understanding. Far from the unfunny sentimental nonsense I was told to expect, Three’s a Crowd is an astonishing work of singular genius, and one of the finest and most misrepresented movies of the silent era. Once you get over certain expectations and start to realise what Langdon is trying to achieve, there are few superlatives that can do the film justice. It is nothing less than a masterpiece. 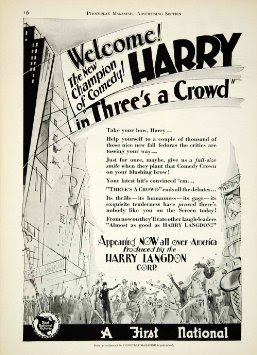 However, before we get to that, let’s review the events that led up to the making of the film and the received wisdom that gives it such a bad reputation. In brief, Harry Langdon started late in movies (he was almost 40) but within two years of his screen debut in 1924 had found a winning formula working for Mack Sennett in creative union with director Harry Edwards, writer Arthur Ripley and gag man Frank Capra. At the height of his fame and influence he signed a six picture deal with First National and took the team with him, promoting Capra to director. The first three movies of the new deal (Tramp, Tramp Tramp, The Strong Man and Long Pants) were very successful and represented the commercial peak of Langdon’s career (and perhaps his most consistently funny work). Popular with critics and moviegoers alike, Langdon was being hailed as a real threat to Chaplin’s crown. Everything was fine for a while but during the production of Long Pants, the cracks in the team began to show.

It seems that Capra and Edwards disagreed over the pacing of Long Pants, and Langdon sided with Edwards. Differing in comic philosophies with Capra, the rift culminated in Langdon firing Capra, leading to a very bitter public dispute that cast Harry in a poor light to the public and press. He decided to go it alone and directed the three remaining pictures of the contract himself (though his collaboration with Arthur Ripley continued). These three (Three’s a Crowd, The Chaser and Heart Trouble) were box office flops and First National did not renew the contract. With the coming of sound Langdon was out of work and declared bankruptcy. He had gone from being a top box office star in a major studio to working on poverty row in the space of a year and his reputation never fully recovered.

That’s the basic story as it is told in most accounts of film history, and that narrative exists due to a number of reasons. Firstly, upon being fired Capra, in order to salvage a burgeoning directorial career apparently vented his frustrations to the media, thus giving Harry Langdon the air of a man who was difficult to work with and egotistical. After Harry’s subsequent movies flopped, his prophecies appeared to hold weight despite the truth being slightly more complex. However, what really tarred Langdon with the brush of failure was a number of statements made by Frank Capra in the intervening years, after Langdon’s death in 1944

Firstly there was film critic James Agee's hugely influential feature in Life Magazine in 1949, entitled ‘Comedy’s Greatest Era’. It is now regarded as a seminal article and responsible for a great upsurge in interest in silent comedy at a time when many of its old stars had been all but forgotten. Frank Capra was a key interviewee, and when asked about Langdon noted that, “Langdon was almost as childlike as the character he played” and that when things went wrong in his career he “never did really understand what hit him”. This conceit that Landon was but a clueless puppet in the hands of the long suffering and hard working creative staff tasked with the unenviable job of coming up with something for him to do remains to this day. The fact that in a separate interview, Mack Sennett agreed with the notion entrenched it in critical history.

However, just in case anyone missed this character assassination, Frank Capra wrote his autobiography in 1971 and went into more detail regarding his views on Langdon’s artistic demise. His autobiography goes to great lengths to show how he was right and Langdon was wrong, and that Harry Langdon and his ego brought all his troubles on himself. The main tenant of his argument is that Langdon never understood his own character, or indeed his own comedy and could only be successful if guided by the safe hands of someone who did understand, like Frank Capra. According to Capra, at a screening of rushes at the Sennett studio, Arthur Ripley thought Langdon’s performance was so bad that he was beyond help and that “only God can help an elf like Langdon”. Capra claims that this became the basis for the character of Langdon’s successful years, an innocent fool out of step with everyday life, for whom his only ally is God. And there you have it - the hopeless vaudeville comedian was successfully moulded into a box office star by following the strict instructions of Capra and Ripley, and when he decided he didn’t need them, his career instantly derailed. 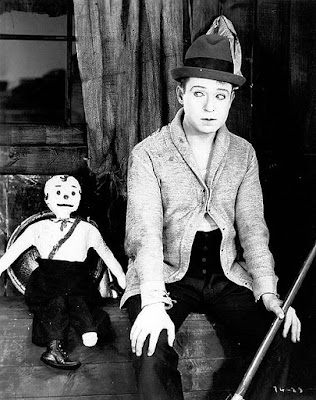 This theory has been successfully demolished by critics and historians such as Walter Kerr,  Joyce Rheuban and David Kalat but still persists (indeed, Langdon’s imdb bio repeats the old story). Capra’s account of things completely ignores the fact that Langdon had been a hugely successful vaudeville star for years who brought a clearly established character with him when he broke into movies in 1924. Langdon had already been making shorts for 2 years before Capra even joined Sennett, thus making the story about viewing early Langdon rushes impossible to have happened – out of 21 Langdon movies at Sennett, Ripley received his first credit on the 13th and Capra on the 15th. Virtually every part of the Langdon character was in place by the time they arrived, but what Capra did eventually bring to Harry Langdon’s work was a sure directorial touch, some needed focus and a clear sense of what was commercially popular.

Not to say that the new narrative should be all about bashing Frank Capra and his legacy. Capra’s success and career speaks for itself, and his role in Langdon’s downfall has really no bearing on his own movies and talent. What has to be brought to task is when his statements don’t match the facts, and when these facts can be readily evidenced on the screen. It’s understandable that Capra was angry and bitter at being fired by Langdon and as they say, history is written by the victors. However, it comes of as especially churlish to kick a man when he is down, and from his position at the summit of Hollywood’s hierarchy, that is exactly what Capra did to Harry Langdon. Also, what rubs people the wrong way is the fact that Capra essentially sets himself up as the man pulling Langdon’s strings, that much like Langdon’s screen persona, the real Harry Langdon was a hapless bystander as Capra orchestrated his success. Leo McCarey attempted the same thing in his later years too, insisting that Stan Laurel knew nothing about comedy and claiming all the credit for the creation of Laurel and Hardy's best work, regardless of the facts. Sadly, while people take McCarey's words with a pinch of salt, Capra's are often still treated as gospel.

What Three’s a Crowd proved is that without Capra, Langdon felt he was free to explore his comedy without the same commercial consideration. Ever the populist, this was something that Capra could not conceive of, and therefore in his head it was wrong. Even Capra’s central idea of ‘God is his only ally’ was rejected by Langdon, as for him his comic persona is so far removed from reality, and so wretched that even God openly abandons him. It’s an idea of startling daring and resulted in Harry Langdon creating a film of immense beauty, a dreamlike parable of despair that is so far removed from what his silent comedy contemporaries were delivering that it shocked audiences into confusion.

So there I was, watching my DVD of Three’s a Crowd and struck by the notion that firstly, the film wasn’t really that funny, and that secondly Langdon the director seemed to have no concept of editing (several scenes just lasted far too long). After ten minutes I realised that I was falling into the trap of all the audiences that watched it in 1927 and beyond in that my expectations did not match the delivered product. As I mentioned previously, I stopped the DVD and thought for a moment about what I’d just seen (something that I appreciate cinema audiences would never have the chance to do). Three’s a Crowd is not a comedy in the traditional sense, it’s a dark comic experiment that serves as manifesto for Langdon’s daringly abstract, absurdist view. I started again, with a glimmering of knowledge that this was something a very different and a bit special.


Next time, we shall look at the film itself and marvel at its many wonders…
Posted by Russell at 17:24 2 comments: