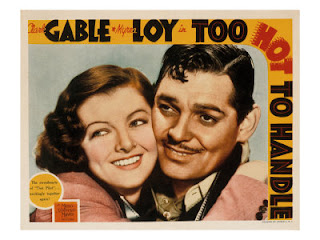 When it comes down to it, Myrna Loy is my absolute favourite film star and I have been besotted by her for nigh on twenty years. I remember vividly trying to find out if she was still alive in the early 90's (this was before the internet, kids and up to date information was hard to come by) and literally on the week that I found out that she was alive and living in New York, I opened the local newspaper to find a small article entitled "Perfect Wife Myrna Dies Age 88". Talk about bad timing - always the bridesmaid, never the bride...
Anyway, the film that got me started with her was Too Hot to Handle. I'm not sure why I watched it, I may have been giving Clark Gable a try or it may just have happened to be on one afternoon and sounded good. It's all lost in the mists of time, but I do remember being hugely entertained by the sparkling dialogue between the two stars and in particular by the poise and presence of its female lead, whose exotic sounding name was new to me. The movie zipped by in a screwball blur and I immediately decided that I needed to find out all I could about this Myrna Loy person.
Recently I realised that I had been amassing a substantial library of classic movies but not actually watching many of them, and so have been making an effort to catch up just in case I meet by an untimely demise and on my deathbed regret never having seen The Horn Blows at Midnight (you never know, morphine drips make you think all sorts of things). This has involved watching films that I haven't watched since way back in the day, with sometimes a gap of fifteen years or more. This was one of them and when it's number came up (I'm ashamed to admit it but I pick the films to watch by way of a highly complicated lottery - I have too much time on my hands, sorry), I knew this was going to be interesting due to it being the one that started it all. In my sepia tinted, soft focus memory it outshone all others as a perfect example of star comedy complete with sizzling chemistry and zinging one liners. Like His Girl Friday (another film I haven't seen in about twenty years) and Bringing Up Baby all rolled into one. Or something.
Having watched it again, it's still the great film I remember and hugely entertaining, it's just that the chemistry between Myrna Loy and Clark Gable that I'd remembered just...wasn't there. What was immediately apparent from the start is that although the film was made to capitalise on the Gable-Loy success of Test Pilot, made the same year, is that this one is really all about Clark Gable. Myrna admits as much in her autobiography, saying her role "wasn't much of a part, rather routine". I'm a big admirer of Clark Gable rather than a fan and I have to admit he's just a force of nature in this one. He does action, drama and comedy and sometimes does them all at once, just to show how easy in is for him. He shouts from the top of Hollywood's Mount Olympus at the ant-like lesser stars below, taunting them with his palpable charisma and lust for life. The film made me realise what huge, huge deal he was in his day in a way that I don't think has been matched. If you look up the definition of 'film star (male)' in the dictionary, there should be a big picture of Clark Gable and nothing else other than 'see also: charisma and screen presence'. Faced with this whirlwind of manly activity it's hardly surprising that Myrna finds herself somewhat sidelined. In some scenes she's positively restrained. I've heard the word "bored" bandied around by some critics but I choose not to believe such uncharitable accusations.

However, it starts off promisingly for the pairing as Gable rescues Loy from a burning plane for complicated plot reasons. They argue like cat and dog, doing the characteristic screwball comedy patter of men and women talking in a really fast snappy way that seems to be another lost art these days. For a second Loy is playing the part as Katherine Hepburn or perhaps Joan Blondell would, and the viewer is led to believe that this will be one of those battle of the sexes comedies where the plucky and stubborn woman shows that she's really the equal of any man. Sadly it's not to be and as soon as Myrna is out of her aviator outfit and into a rather stylish hat she adopts a mildly passive pose as Clark Gable and Walter Pidgeon take up the battling and squabbling. Ah, well it wasn't to be. I never believed she was an ace pilot anyway and I don't think she did either.

Throughout the rest of the picture she does her bit but she shows little of the intelligent charm, sly humour and sophistication she's known for, despite a decent script. It's like she decided to let Gable shine in this one, for the good of the picture. If so, it was the right call and shows the instincts of a clever and generous performer. Nevertheless, a toned down Myrna Loy is better than none at all but it's strange how memory plays tricks on you. If she shows little of her established screen persona, I wonder what it was that made her stand out so when I first saw the film? Personally, I think it was all of the above characteristics, and that when I saw more of her films I realised that I hadn't really seen her at her best. and it goes without saying that her looks may have helped a little too. Even though, it's always disappointing when you see a (usually minor) star in a film then find that they are never quite as good in anything else as they were in that first film you saw them in.

So there you have it, Too Hot to Handle fifteen years on. Still a fantastic film with two fabulous stars, but with one of them shining slightly brighter this time around. After all these years I've realised that Gable is great, but Myrna is still my favourite.
Posted by Russell at 15:11