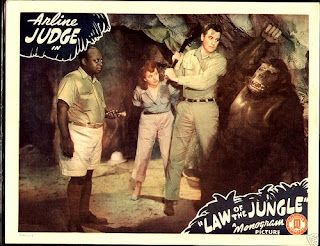 Watching Law of the Jungle marked two important firsts for me. It was my first Monogram Picture and it was my first exposure to Mantan Moreland (looking back, I doubt this actually the case as I remember regularly watching Charlie Chan films as a kid, but it's certainly my first exposure as an adult). It's odd that it's taken this long to visit the Monogram corner of poverty row as I grew up being as familiar with the Republic logo as those of the major studios. Now, being new to this I have little idea of which films are the best or worst examples of Monogram's output but in this showing they managed to create a fast moving and thoroughly enjoyable adventure comedy. And since their goal wasn't to make Oscar worthy dramas (I believe they would try that later though) but cheap and cheerful double bill fodder for the masses, I think Law of the Jungle works very well.

The plot is the typical matinee mix of thrills, involving a singer stranded in Africa meeting an archaeologist and getting involved with a Nazi plot to create unrest within the local tribes. Add to that a comic sidekick, an unconvincing gorilla, some unexpected characterisation and lots of silly slapstick and you have a winning formula, with the emphasis on formula. Of course, none of this really matters, it's just an excuse for some action, a couple of songs, some knockabout fun and a guy in a flea bitten gorilla suit. Who could resist?

As would be expected from a studio bound jungle picture, the direction by Jean Yarbrough (later to become the producer of Abbott and Costello's TV show) is serviceable and the cast are generally solid. Arline Judge (here ten years removed from her turn in Girl Crazy) brings enough life to her part to keep it interesting though John 'Dusty' King (known mostly for his appearances in westerns) as our leading man is painfully wooden. Some of the supporting cast are quite interesting, with Arthur O'Connell giving an odd, twitchy performance as Judge's shady nightclub boss. He slithers and slopes about in his early scenes like he's trying to bring some hidden depth to an otherwise one dimensional character and as as a result becomes one of the better remembered elements of the film. He would go on to find later success as a character actor in film and television, eventually receiving two Oscar nominations. At this point in his career you can tell he's possibly a tad more 'method' than his co-stars. Also of note is Laurence Criner as the tribal Chief who almost steals the show with his appearance in the last reel of the film, but we'll get to that later.

Of course, if it wasn't for the man billed third, Mantan Moreland, I doubt I'd be writing this review and nor would anyone be interesting in watching this film. Regardless of the thorny issue of race, he simply makes the film worth watching. If his representation of an African American is considered mildly offensive to some then so be it, but the fact of the matter is that we care a whole lot more about him that we do the stiff supposed stars of the picture. He stands out as the only real person we can connect with and share in the adventure with and he brings an element of spontaneity to every scene he is in.

Mantan Moreland specialised in the comedy sidekick, usually playing butlers, manservants, chauffeurs and the other assorted menial jobs that were the only way for black actors in the 30's and 40's to get screen time. He played up the bug eyed, superstitious manservant, constantly afraid for his life. However, to this stock character he added his own impeccable timing and charisma to create a lovable everyman that stole every scene he was in and who always got the upper hand with a zinging one liner. Of course, this sort of act quickly fell out of favour when the growing civil rights movement gained momentum in the 1950's and it's only really now that Moreland and his contemporaries are beginning to be reassessed.

The issue of race is always a difficult subject when watching Hollywood films of the Golden Age as generally, the only representation black actors get is in the stereotypical manservant or housemaid role. Of the films I've watched in the last few years I can only recall a few instances where attempts were made to reverse this trend and portray black characters as real people. Frank Capra's Broadway Bill (1934) has a black stable hand character played by Clarence Muse who at times is almost treated as an equal of star Warner Baxter (and also is shown the true pecking order by him at other times). Despite suffering occasional racial slurs, Muse almost steals the picture, investing dignity and humanity into a character that I'd imagine the script didn't give much to. Another good example is Third Finger, Left Hand (1940) directed by Robert Z. Leonard. In this, Ernest Whitman plays Sam (he's even given a name), a porter on the train the leads (Myrna Loy and Melvyn Douglas) are travelling on who is roped into pretending to be a lawyer for them. Sam, at first speaking in the sort of grammatically incorrect "yassuh!" voice that all black people have to use in these films, drops the accent and reveals that he's been taking correspondence courses in Law and is actually very knowledgeable on the subject. We then see him with spectacles on and law book in hand quoting all sorts of complicated by-laws as he does his job and becomes the catalyst that brings Loy and Douglas together. All this happens in the last ten minutes of the film and is a really pleasant surprise. He even get the last line of the film, as if to highlight his sudden guardian angel role.

Sadly, these examples are the exceptions when it comes to black actors on the screen, though I don't doubt that there are a few more examples out there. Into this social mix with its hard glass ceiling step actors like Mantan Moreland. The frequent criticism of him being a sell out to black people just doesn't stand because without actors like him there would be no black people at all in these films. Where he, and others like Eddie "Rochester" Anderson triumph, is in making the most of the situation and by attempting to overcome their second class status by sheer talent and charisma. Anderson, of course for the most part had the protection of Jack Benny and his writers always giving him the best lines and never putting him in any demeaning situations. Moreland didn't have this protection so using his vaudeville training he just went ahead and stole the show from everyone he starred with.

Given this argument, brief mention needs to be made of the other prominent black actor of the time, Stepin Fetchit, whose particular version of the stereotype character involved making him lazy, slackjawed and backward, every racist film goer's expectation of the average black man. Though he was very successful at his peak, his particular brand if comedy plays quite uncomfortably nowadays and it's frankly difficult to defend other that to say that at least he was making money to feed his family. I'd contend that the likes of Moreland and Anderson have little connection to him in terms of their film legacies. For a start, as stated before Moreland comes out of Law of the Jungle as the most human and most real of all the characters and almost single-handedly saves the film (and I'd imagine many other films) from the doldrums. This is something Monogram clearly understood due to the number of times they used him and the prominent billing they gave him in all his appearances, something possibly no other black actor in Hollywood was regularly getting.

However, Law of the Jungle is by no means a fully integrated non-racial film. Typically of poverty row productions its humour is aimed low and its characters painted in broad strokes. Most interestingly it shows some sort of racial hierarchy as Mantan Moreland constantly swindles the gullible natives and gets them to work for him, thus reversing the position he has with his own master, archaeologist King. The main tribesman is also called Bongo, which tells you everything you need about the depth and subtlety of the characterisation.

The best moment in the film comes at the end, where our three leads (King, Judge and Moreland) have been captured and awaiting some terrible fate at the hands of savage tribesmen. King supposes that they are cannibals to which Mantan makes a crack about how that's bad because everyone loves to eat "dark meat"(it's a low brow line but his delivery was hilarious). The leader of the tribe has a fat, ugly daughter who takes a shine to Mantan for some absurd comic business before they are led off to meet the Chief. In a brilliant twist, the Chief, played by Laurence Criner is college educated and speaks in clipped Ronald Colman -like tones while puffing stoically on his pipe. It further turns out that he belongs to the same Lodge as Mantan in Harlem. This juxtaposition of the educated savage is also used to good effect in, of all places, Old Mother Riley's Jungle Treasure (1951) where all the supposed cannibal tribesman are in actual fact ex-Oxford graduates who spend their time (in full tribal dress) listening to the cricket on the short wave radio. In the end Criner and Moreland catch the Nazis, save the day and between them save the film.

It's a real shame that actors like Mantan Moreland are still criticised for giving a negative portrayal of black people on the screen. All these films have to be seen in their context and with the consensus racial views in place. I feel that often people make too much of it, as Moreland was merely using his comic gifts the only way he knew how. His round, big eyed face lent itself to over the top expressions and his short, portly stature and street wise accent suggest a non violent coward who lives on his quick wits. In the scenes where Moreland freaks out in a dark cave before discovering a giant ape, I couldn't help thinking that his expressions, reactions and mugging could have been replicated, double takes and all by Lou Costello and no one would have batted an eyelid. Okay, so he's playing a manservant character, but he always comes out smiling and gets the best lines. If you asked anyone who saw Law of the Jungle, either at the time or now, who their favourite character was I guarantee that everyone would side with Mantan Moreland, he just has a special charm about him. People of all races and creeds have obstacles stopping them from achieving their potential, and Hollywood was perhaps the hardest place for anyone (black or white) to get noticed, but some way or another talent always finds a way to be seen. Moreland can't be criticised for his performances, rather the criticism needs to be leveled at a system who only made certain types of roles available for him to play. He's simply overachieving in the situation he was given and was and remains a very talented and funny man. Monogram Pictures deserve some credit for realising this and for giving him the opportunity to become one of their most bankable and entertaining stars.
Posted by Russell at 17:02