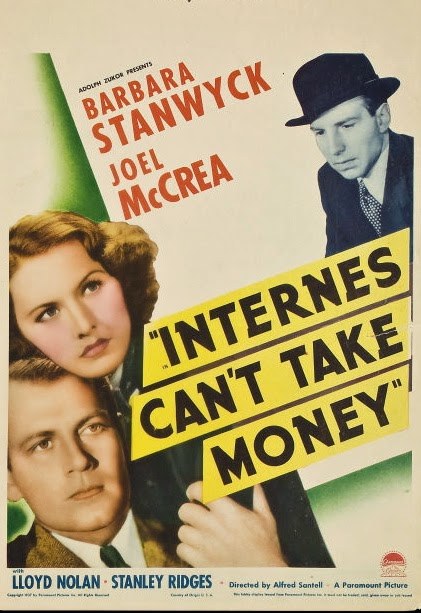 What is it about?: A young medical intern named Dr. Kildare helps a widowed ex-con to find her missing child and avoid the clutches of an unscrupulous mobster...


Snapshot Thoughts: Aside from it’s archaic spelling of ‘Intern’, Internes Can’t Take Money is an odd little film. It’s the very first Dr. Kildare movie yet it stars Barbara Stanwyck and largely side lines Joel McCrea’s Kildare, with the end result being that it succeeds in fully showcasing neither. The following year, MGM took over the Dr. Kildare series and recast it with Lew Ayres and Lionel Barrymore and in doing so created a very successful and well remembered movie franchise, but this film is an almost noir-ish anomaly. As it is, it’s an interesting mix of medical drama, gangster film and melodrama with a stellar ensemble cast. I have no idea why Barbara Stanwyck took on the film as it seems like such a B picture for a star of her stature. Despite this, Joel McCrea is everything you would need from a dashing young doctor: tall, blond, principled and fearless and he always has good chemistry with Stanwyck. Barbara Stanwyck herself is the epitome of melodramatic desperation: she spends the majority of the film with her eyes glistening with fresh tears (they never quite roll down her cheek), forever on the verse of emotional collapse and fuelled by determined motherly love. However, because the movie splits its time between their individual plotlines, sadly neither star is well serviced by the film. 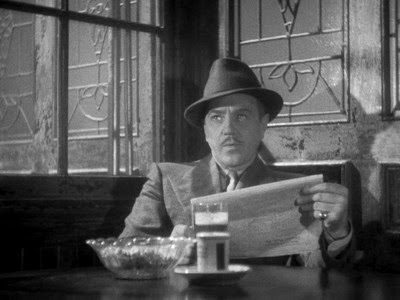 Star Performances: While the two stars are good in their roles, the movie ultimately belongs to the supporting cast of character actors playing the story’s many underworld dwellers. Lloyd Nolan is excellent as ever as the gangster whose life is saved by Kildare and although he is only in the last 15 minutes of the film he gives considerable depth and range to the part, transforming from anger to understanding at Dr. Kildare’s situation in a brilliant piece of emotional acting. Also of note are Charles Lane as the world’s grumpiest butler and Irving Bacon as a eye patch wearing barman, both adding some (off) colour charm to the proceedings. However, Stanley Ridges pretty much steals the picture, and every scene he’s in as the blackmailing criminal Dan Innes. Relaxed, smug and confident, he is a man perfectly at ease with his place in the world. His life is a continuous game of exerting power over people, from his butler (a friend who lost a card game to him and was shanghaied into service to pay the debt) to Stanwyck’s Janet Haley, to whom he dangles the carrot of knowledge about her missing child. One of the props that Ridges uses to his advantage is the character’s love of popcorn. The popcorn has many uses in the movie, mostly as an innuendo laden conversation topic, but the way he casually takes handfuls, rolls them around in the palm of his hand and chews slowly just reeks menace and intimidation. He may dress very dapperly, and his apartment is that of a playboy who likes the finer things in life, but Stanley Ridges never lets the audience forget how dangerous and callous a thug Innes really is.


Technical Excellences: Despite the movie being a B picture, it is shot and dressed like a far more prestigious vehicle. The art direction by Paramount mainstays Roland Anderson and Hans Dreier are superb, with the hospital and bar sets being stylish and evocative. The hospital set in itself is a thing of beauty, with Art Deco designs and lettering combining with an open plan clinic with large bay windows displaying stylised matte views of the Manhattan skyline. Later, the bar set reverses the feeling, giving a turn of the century, dingy, smoky environment where backroom deals are done and shady mobster hurry back and forth through the grubbily ornate swing doors. A lot of thought has been put into the look of the movie and it lifts the production from a run of the mill melodrama to a brilliantly conceived slice of late Depression life.


The Sublime: Perhaps the highlight of the movie occurs when Janet (Barbara Stanwyck) visits Innes (Stanley Ridges) in his apartment to attempt to come to some sort of 'arrangement' for information about her missing daughter. The scene starts with an insight into Innes’ life as he sits in bed clad in his expensive dressing gown eating breakfast (which looks suspiciously like popcorn) served by his ill mannered butler Grote (a brilliantly chosen name for surly Charles Lane). Janet arrives and the two move through to the living room to talk, all the time the walls glowing with the dancing shadows of the rain hitting the windows outside. Innes tries to turn on the charm but Janet nervously ignores it . In a nice piece of business, when Stanwyck sits down the chair is quite low and exposes her knee. She subtly and awkwardly pulls her skirt down as she adjusts her seat while he eyes her wolfishly. The conversation turns to what she can do for him and as ever, he brings up the subject of popcorn, saying “I didn’t always like popcorn. I didn’t like it until I tried it. First it was kind of hard to take, used to stick in my craw. I guess I hit you about the same way, don’t I?” He purrs the words in a deliberate way that leaves no doubt as to what he’s really suggesting, and all the while his eyes seem to be imagining what sort of arrangement Janet and he could come to. Never has popcorn seemed to threatening. 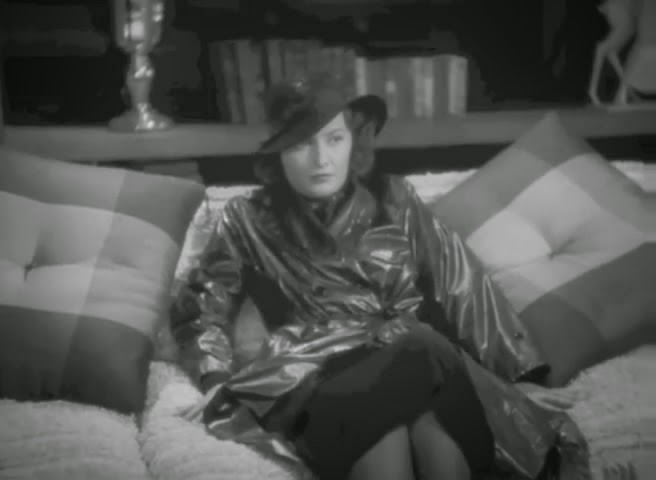 The Ridiculous: The 30’s must have been a confusing time to live in if you had lost a child. Stanwyck’s character Janet spends most of the movie trying to find her lost three year old daughter in orphanages despite not having seen her since she was a baby. She’s told (quite reasonably) by a kindly nun that “babies change a good deal in two years. Their features change”, but despite this Janet feels she only needs to look into the child’s eyes to know which little moppet is hers. She’s also good at picking needles out of haystacks I hear. Oh, and this despite the fact that the orphanage only need the barest of anecdotal evidence to be convinced that they should give a child to a woman fresh out of prison, but I digress. Anyway, I don’t have to spoil it for you for you to guess how it ends, but just to hammer home every available cliché we are treated to an astonishing final tableaux of mother and daughter reunited as a heavenly choir sings, flanked in shadows by the Mother Superior, the good Dr Kildare and a massive statue of the Virgin Mary that looms up onto the screen out of nowhere. Praise be! For it is a miracle! Boy, did those Jewish Hollywood people love their Catholic imagery but I guess it kept the censors happy.


Is it worth watching? It’s certainly a by the numbers Barbara Stanwyck film, and is possibly one of her most forgettable appearances of the decade but she’s likable and vulnerable and determined as ever and doesn’t disappoint. If you are a fan of the Dr. Kildare series then Internes Can't Take Money it has to be watched as a curiosity (in the same way that the first sound Charlie Chan film Behind That Curtain bears no resemblance to the long running series that followed it) and an interesting comparison. If you don’t judge it as a Dr. Kildare film then there’s a lot to like. The movie looks great, is directed with style and has a fine cast of well written characters. All in all an overachieving B movie with an A list cast. Bring your own popcorn.


Random Quote: “Popcorn’s good for you, you know. Roughage.”
Posted by Russell at 10:41