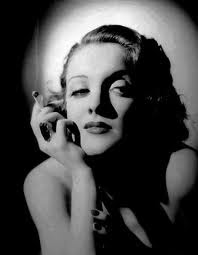 One thing that I find interesting about the days of the big Hollywood studios is the professional hierarchy that existed and the inherent social struggle that was fought behind the scenes as stars, wannabes and veterans slid up and down the ladder of success. Sometimes this was due to a lucky break or a hushed up scandal, occasionally it was due to public opinion, but more often than not it was due to the fickle whims of Fate, or something with even more power than that – a producer.  Of course, in this movie hierarchy there were the big stars at the top that would headline the pictures, followed by the co-stars, featured players and character actors that filled the bill of an average film, all the way down in decrements of importance to the lowly anonymous extra. This pecking order gave rise to the classic Hollywood story of the unknown face in the crowd who climbs the ladder from the bottom and ascends from obscurity to become a glittering star. It was a fantasy that fueled many careers and even more broken dreams, as sadly the reality was that off screen it didn’t really happen that way.

However, just above the extra and quite a bit below the featured actor is what could be called the ‘bit part’ player. These are the (mostly) young actors and actresses that were on contract with the studios and who were used in small parts in movies. It’s in this sub-section of the movie making society that we can observe the dreams of every young girl or boy who won a local talent contest and moved to Hollywood to make their fortune. In these fledgling actors we can also be reminded that despite good looks, charisma and even talent the life of a contract player seemed to depend perhaps more than any other performer on the totem pole on timing, connections and old-fashioned luck. All they were given was an opportunity, and sometimes it was even out of their hands as to what they did with it,

I thought I’d try to write about a few of these minor players from time to time as on every occasion an actor or actress grabbed my attention in a small role in a film, I’d look them up on IMDb only to find that they had a brief career in pictures with perhaps one or two good parts until the work dried up, the contract ended and they seemingly vanished off the face of the earth. Sometimes all you find is a host of uncredited bit parts for a few years and then an abrupt end. I always wonder what happened to these people and how (or if) they ever adjusted to normal life after glimpsing the bright lights of Hollywood. Just due the sheer volume of talent being regularly brought in by studios that were constantly chasing the next big thing, there must have been so many promising careers brushed aside and not given the time and support they needed to grow and mature.

Due to this high volume of bright young things constantly entering Hollywood, the chances of success were slim as a contract player and very few made it to the big time. Failure is something that has always slightly fascinated me and whilst none of these bit part players truly failed (after all they got screen time with some of the biggest stars in Hollywood, which is lot more than 99% of movie hopefuls would ever achieve), for different reasons their Hollywood adventure just didn’t pan out the way they thought it would and within a few years they were doing something else with their life. At the end of the day, broken dreams are as much a part of the Hollywood myth as success, and inevitably everyone has to play their part in the machine to keep it ticking along.

Anyway, with the introduction over let’s turn to the first of my forgotten contract players, Miss Dorothy Dare. 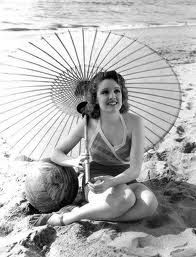 Dorothy Dare had a three year career in Hollywood from 1934 to 1937 (though she made an early appearance in the 1933 feature Nearly Naked, this was before she signed her contract with Warner Brothers) which was highlighted by occasional featured roles, some memorable musical performances and sadly quite a few small parts. She came to Hollywood from the Broadway stage, having appeared in a number of Ziegfeld shows and this experience was put to good use by the studio who initially used her in a variety of Vitaphone musical shorts.

I’m not entirely sure how she broke into her show business career but I was looking through my modest collection of film magazines and found her name mentioned as a talent contest winner for Screen Play magazine. All the fan magazines ran these talent contests though I’ve never been sure how legit they were as the winners usually went on to nothing of note and a short studio contract. Of course, they always needed to dangle the carrot of a relatively big name that did make it in Hollywood to convince hopefuls that they had a chance, and on this occasion Miss Dare was their carrot. However, in the September 1934 issue, while plugging the new Screen Play contest it is noted that -

“Miss Dare was an ambitious but practically unknown reader of Screen Play until she won the Pot of Gold contest a few years ago. Instead of a trip to Hollywood Miss Dare decided to accept a cash prize and used this as a stepping stone on the Broadway stage from where she has now graduated to motion pictures”

If this is true, the fact that she turned down the opportunity to go to Hollywood and instead opted to hone her craft on the stage implies that she had a dedication to learning and improving and some semblance of a long term plan for herself. Where others rushed it, it sounds like she seemed to have an idea of the level of experience and polish necessary to make a splash on the screen. Ultimately as a result of this patience she had a decent, though brief, career in pictures where other talent contest hopefuls disappeared within months of their arrival.

After appearing in a few well-received Vitaphone shorts she made her feature debut in Happiness Ahead with Dick Powell, billed seventh in the cast list. Dorothy followed this with a small part in the James Cagney film The St Louis Kid and a couple of great musical numbers that bookended Sweet Adeline with Irene Dunne. This all led up to undoubtedly her greatest feature appearance, as Dick Powell’s girlfriend in Gold Diggers of 1935. Sadly, despite an impressive showing and one where she displayed a promising dramatic ability, it was back to musical shorts and walk on parts, with the exception of a starring role in a 1937 B picture High Hat (which sounds pretty great though I haven’t seen it) By the end of that year Dorothy Dare was out of pictures, save for a poverty row appearance for PRC in 1943. She was so good in her limited screen time at her peak, with a peppy song and dance style and an undeniable screen presence that I’ve always found it hard to believe that no one at Warner Brothers took notice. Sadly, that is exactly what seems to have happened.

Personally, I first noticed Dorothy Dare when watching the Bette Davis and George Brent film Front Page Woman where she has a small part as a showgirl who helps Brent with his investigations. She’s only in the one scene but she is just so full of energy and glamour that for me she just lit up the screen. With her big eyes and beaming smile she reminded me of a young Joan Blondell but with the polish of a 40s star like Dorothy Lamour or Betty Grable. Despite that fact that her career had already peaked by this point, it’s strange that she never received more of a shot at stardom, as she was clearly very comfortable on camera and good at making the most of limited material. Perhaps it was timing as with her look she was too late to be a pre-code ‘chorus girl made good’ type but too early to be a wartime pin up. If she had come along a bit later I think she would have fitted in very well with the likes of Carole Landis, Vivian Blaine and many others as a polished singing and dancing 40s pin up starlet. Regardless of this, she is perfecting charming in her short Front Page Woman appearance and though obviously would have been better suited to musicals, she seemed to have more than enough star presence to sustain a lengthy career of some sort. Alas, it was not to be, and like many other starlets she obviously didn’t receive the support of the studio and she was out of work when her contract was up. 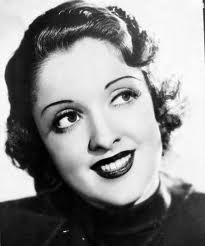 Ironically, it’s in death that Dorothy Dare perhaps achieved her most lasting recent fame. A brief search on Google for her brings up the strange tale of the Internet hoaxer who a few years ago appeared out of the blue claiming to be her and very much alive. At this time the details about her post Hollywood life were at best vague as she was a private person and little was really known about her life. Anyway, the hoaxer led some people a merry chase via email, answering questions about her friendships with an assortment of stars until a few resourceful people figured out that the facts didn’t quite add up and that in reality, (after some research) Miss Dare had died in 1981. It was a strange choice of subject for a hoax but the episode briefly propelled Dorothy Dare back from obscurity and into the minds of classic film fans.

Despite this, Dorothy Dare stands as a good example of the fact that dreams don’t always come true no matter how hard you work, or how pretty you are. It’s a bitter lesson that many have experienced in Hollywood and is as much a part of the allure of tinsel town as the chance to win an Oscar. However, though her appearances were brief, I believe that she like many other young contract players deserved better and had the timing presented itself she had more than enough talent to make a good (and lengthier) career for herself. Unlike faded or failed movie stars a decade later, there was no television for her to try to find work in, and by the 40s she was probably too old to go back to the chorus line. Ironically, that she didn’t get the chance is part of Dorothy Dare’s appeal, destined like so many others to be just another face on the screen, tripping as she climbed the ladder upwards to stardom
Posted by Russell at 15:17