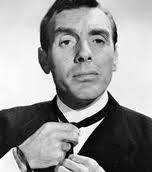 Eric Sykes, one of the most talented and influential comedians in British entertainment history has died today aged 89 after a short illness. An actor, writer and director Sykes, along with Spike Milligan was largely responsible for the shape and form of post war comedy. Though I’d imagine he is virtually unknown outside of Britain, the importance of his work in the development of modern humour really cannot be stated strongly enough. While Spike Milligan single-handedly brought comedy out of its stale music hall roots and into a modern world of surrealism, anarchy and satire, Eric Sykes’ work served as the needed contrast, still surreal yet delivering more structure to the unstructured, and replacing Milligan’s free-wheeling wrath and bite with good natured whimsy and believable situations.

As a director, he was known for creating a handful of short silent films starting with 1967’s The Plank through to 1993’s under rated The Big Freeze. His films, in which he also starred and wrote, are beautifully constructed pieces of comedy filled with the sort of brilliantly realised physical gags only really seen in the golden age of the silent era. The films reveal Sykes as a true modern day practitioner of a comic lineage started by the great silent clowns. A friend and confidant of Jacques Tati, his careful, meticulously paced and layered visual approach to comedy not only echoed Tati’s (albeit on a smaller scale) but he was really Tati’s only true heir, and as it proved, the last of that particular line.

Eric Sykes got his start working as a script writer for radio in the late 40s with the B.B.C and he soon found himself as an in demand gag writer for virtually every big name in 50s entertainment in Britain. His penchant for painting visually surreal pictures with his words, particularly when writing for the popular comic Frankie Howerd marked Eric out as stylistically new and different from his contemporaries. Sykes eventually honed his style to a smooth mix of loosely structured situation and whimsy, which then gradually led to his return as a performer in his own sitcom for BBC television. Paired with Hattie Jacques, a large character actress who played Eric’s identical twin, his show Sykes And a… (and later just Sykes) set the bar for situation comedy in a household setting. I would go as far as to say that in terms of the domestically set sitcom, the sheer quality and variety of his work has yet to be bettered. Sykes is an endlessly creative show, cosy and gentle yet with each episode brimming more ideas than most shows had in a season. It’s no coincidence that Peter Sellers chose to make a rare 1970s television appearance on Eric’s show in a particularly memorable episode. 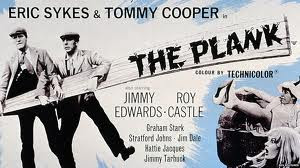 As an actor, Sykes was always in demand on the stage and in films and television. He had been a regular in movies from the 50s with particularly noteworthy appearances in Heavens Above! with Peter Sellers, the all star Those Magnificent Men in Their Flying Machines, Shalako with Sean Connery and Theatre of Blood with Vincent Price. More recently he was seen in The Others with Nicole Kidman and as Frank Bryce in Harry Potter and the Goblet of Fire. He specialised in portraying a certain type of nervous and jittery everyman in his few lead roles, and later in support played the same type typically as a manservant or sidekick. Despite this typecasting he was an excellent comic actor who played the full range on the stage from modern farce to Shakespeare.

In interviews Eric displayed a great understanding and affection for the work of Chaplin, Keaton, Laurel and their ilk, and a deep understanding of the fact that comedy was not a job but a calling, something that you have to do and which is worked on and honed over years of practice. He also echoed Stan Laurel’s views on comedy being like putting together a watch in that when works perfectly, you can never over analyse what make it work in the first place lest it breaks forever. Someone, I think the writer Denis Norden called Eric “the master craftsman of comedy” which is an apt description if ever there was for his work and truly reflects the care and attention put into perfecting not just his job but also his craft.

He continued to work on television and stage until very recently and despite being virtually deaf and blind had lost none of his ability or energy. I saw him a couple of years ago at a question and answer session at a comedy festival, and even in his mid eighties and quite infirm, brought the house down with his razor sharp wit. It was one of the funniest performances I have seen in my life and treasure the experience to this day.

However, despite a stellar career as a stage, film and television actor, a writer, an author and a director, and by all accounts one of the only truly nice guys in show business, Eric Sykes was always somehow overlooked or just taken for granted. Even his autobiography was amusing called “If I Don’t Write It No One Will”. Sadly, I feel this will continue with his passing. He had no scandal in his life, both the public and his peers loved him and he was ridiculously good at what he did. Yet his gentle, good-natured, universal brand of comedy never truly found an audience to the later generation brought up on a comedic diet bad language and bad taste. He was admired but I get the feeling that few comedians around today truly understand his significance and genius.

Yet until he died today, Eric Sykes was the only man in Britain that could rightly be called a comic genius. I try to think who is left in the world of comedy that can take his place but he was the last of his generation and the last of his kind. Believe me, I’m not overstating it, but in terms of post war comedy and it’s evolution, and in terms of performers who just instinctively knew comedy like the back of their hand we have lost one of the greats. I feel that with him, an era has passed and sadly the world is a poorer place for it.
Posted by Russell at 17:37