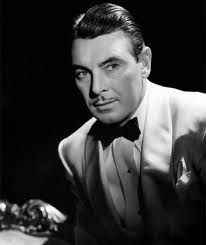 I really don’t think that George Brent, who was born today in 1899, gets the credit he deserves. It’s not so much the case that he’s an underrated actor but that he’s so under appreciated by people in general. He made his screen debut in 1930 and was signed by Warner Brothers two years later, and from that point on he had an amazing run of films over the next fifteen years or so, starring alongside a who’s who of Hollywood. Brent was never a star in the true sense, rather he was best known as a dependable leading man for a variety of star actresses. It’s in this role that he really shines, lending a firm hand to every scene and always complementing his co-star with his presence. For me, when watching movies of the 30s and 40s, the name George Brent in the credits means that more often than not you are going to see an entertaining film.

Brent was born in Ireland and spent his early years flitting between Dublin and New York, firstly to study and latterly when he was allegedly on the run from Irish authorities due to his IRA connections during the Troubles. He eventually discovered theatre and slowly gravitated towards Hollywood. His early films were unremarkable (including the Rin Tin Tin movie serial The Lightning Warrior, which actually sounds pretty fun) and after a short while he was signed to a Warner Brothers contract. The studio pushed him as a leading man right from the start and he spent the early part of his career giving assured support to stars such as Barbara Stanwyck and Ruth Chatterton (who he briefly married). He stayed under contract with Warner Brothers until the 50s before moving into television and eventual retirement. He died in 1979 leaving a resume that most stars would envy, yet today he is largely overlooked by film fans.

George Brent was not an overbearing actor, displaying instead a smooth, easygoing and relaxed screen persona. He had an affable manner on the screen, quite unassuming yet retaining a dignity and poise in his performance. His confident acting style always brought sincerity and integrity to each part and could lend a touch of class to any production. Myrna Loy remembered having great fun with him but confessed that he was known to be difficult to work with and noticed that he was always very aware of last minute script changes regarding his character. Whatever his motivations for working in this manner, the care and attention he gave to his own positioning in a production paid dividends on the screen where he could always be relied on to provide a careful and steady presence in the face of his often temperamental co stars (both on screen and off). I would imagine that Warner Brothers thought of him as a safe pair of hands to rein in the excesses of many of their diva like stars. It is in this role that he shows true abilities, always stamping his own authority whilst simultaneously letting others shine, which I’d imagine is a very difficult skill.

In fact so good was he at this role that he co starred with Bette Davis a total of eleven times and it is to his credit that he was asked time and again to work with her (more often than not by Davis herself), something I doubt many less able actors would relish for fear of being eclipsed on screen. In Davis classics like Jezebel, The Old Maid and The Great Lie, Brent more than held his own and succeeded in pitching his performances at just the right level in order for her to showcase her skills. Without someone like George Brent at her side it less likely that Bette Davis would have had such a great run of well received performances in her prime years. Eleven appearances together without being seen as a screen couple is a pretty amazing feat and shows that they both knew exactly what their role in each film was to be. Most importantly, in each of these films Brent was never reduced to mere scenery dressing. 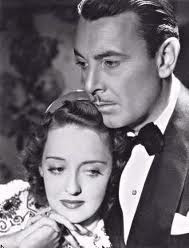 Alongside being a favourite of Bette Davis, he also had long running pairings with other big stars of the era, working six times with Kay Francis, five times with Barbara Stanwyck and four times with Ruth Chatterton. He also worked multiple times with Joan Blondell, Myrna Loy, Claudette Colbert and Loretta Young as well as lending his dependable support to vehicles for Greta Garbo, Ginger Rogers, Jean Arthur, Merle Oberon, Ann Sheridan (who he also married), Olivia de Havilland and many, many others.

However, due to taking the role of leading man to the stars, Brent really never established himself as a star in his own right. In reality, though perhaps being a cut above similar supporting lead actors such as Ian Hunter, Brian Aherne, Melvyn Douglas or David Manners, he did not quite have that special something that makes an actor a star. Though he could be a tough guy, an everyman or a sophisticate, and despite having a good speaking voice and a charmingly suave manner, he lacked that special charisma to take him to the next level. In many of his 30s films such as Miss Pinkerton, Front Page Woman or The Keyhole, one gets the feeling that he got the role because William Powell wasn’t available, and if you compare his performance in these films to any similar Powell film of the era you can quickly see that he was really not quite at the level of a top star. He has a lot of similarities in terms of his style with William Powell when playing light roles but while George Brent merely complements and supports his co-star, Powell always commands the attention and focus of the viewer as the star of the picture.

I’ve no idea what George Brent thought of his career, whether he was disappointed at always playing second fiddle to larger than life stars, or whether he was just happy to be an in demand actor. He received top billing in quite a few films with a variety of starlets in support but none of these films seem to be especially remembered today. Even in his starring role in Racket Busters, top billing went to Humphrey Bogart. I would hope that he was pleased with the job he did in Hollywood, as really it was a highly specialised position and he was probably the best in the business at performing it. I doubt that many actors could survive eleven encounters with Bette Davis and emerge with their reputation and career in place, but he managed it with aplomb.

Often it’s better to realise you are good at one particular thing and stick with it rather than failing in trying to be something you are not. The fact that George Brent was regarded well by his peers and given such potentially difficult parts shows how his particular skills were appreciated by decision makers. In a strange way, if movie goers tend to ignore him it’s probably because he was doing his job correctly, though I think he does need to be recognised for his skills more. Regardless of this, the sheer volume of good films he is in and the fact that he co starred with virtually every top leading lady of the golden age speaks volumes about the quality that he brought to a film. George Brent had a long and successful career and left a host of memorable performances, so maybe sometimes being solid and reliable should not be seen as a bad thing, as he’s the sort of actor that kept Hollywood running by helping others look so good.
Posted by Russell at 11:30