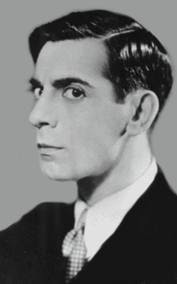 Gene Autry is the only person to have a star on the Hollywood Walk of Fame in all five categories of film, radio, television, recordings and stage. Taking absolutely nothing away from Mr Autry’s stellar achievements, I’ve always thought that if the Walk were to serve a purpose as a true entertainment Hall of Fame (which it doesn’t sadly) then certain stars need to be more fully acknowledged for their true achievements within the industry. To do this it needs to induct a few more into the full house club and in my opinion, first on that list should be Eddie Cantor.

In the early 30s the king of all media in Showbizland was undoubtedly Eddie Cantor. A star in vaudeville and on Broadway, he parlayed his fame into success in movies, radio, music and writing (and later he would become a pioneer and star in television). Eddie was one of the few stars who understood the power of his own image and cannily used it in merchandising as a way to extend the reach (and longevity) of his fame. With his is seemingly massive “banjo eyes”, thick eyebrows and ruffled flop of dark hair, his was an instantly recognisable caricature that appeared everywhere from newspapers to cartoons.

Despite the fact that no one combined talent and success in so many different strands of entertainment, Cantor’s career can be seen as one of over achievement whilst never being seen as the top guy in each of his chosen fields. On Broadway, record and film he was great, but he wasn’t Jolson (of course, who was?) and on radio and television he was a pioneer and evergreen mainstay but neither did he attain the critical and popular heights of Jack Benny. As supremely talented as he was, he seemed to always be in the shadow of one of his contemporaries. Just in the way that Bing Crosby allegedly joked of Frank Sinatra that “A talent like Sinatra’s comes along once a lifetime – but why did it have to be my lifetime?!”, the same could be said of Cantor at different times in relation to his close friends Al Jolson and Jack Benny. Despite being a big enough star that he turned down The Jazz Singer before Jolson got the part, his cinematic life story would later sink into obscurity in comparison to the smash hit that was The Jolson Story. Always the bridesmaid, never the bride...

Eddie took a while to commit to films completely, announcing his abdication of the Broadway throne in an open letter to his patrons in 1930 after a number of false starts. His first sound starring feature, Whoopee! was a mixture of old stage routines and the filmed Broadway tableaux so popular during the first few years of the talkies. However, once he developed his character beyond its stage incarnation, he really took off as a great film comic with a more universal appeal. His movies in the early 30s combined knockabout humour and silly impressions with the trials and tribulations of an perpetually innocent everyman, all topped off with a few song and dance numbers in the Cantor tradition. This heady mix of pure unadulterated entertainment saw him through five films during the pre code era that are among the most entertaining movies you could ever hope to watch.

Cantor’s film career didn’t sustain beyond the mid 30s and after taking a break in 1935, his film appearances became more sporadic, with decidedly mixed results that never recovered the magic of his early days. However, he was always working, and as one door closed, others immediately opened. 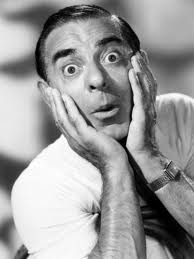 I watched Eddie Cantor’s films on television in my youth and loved them, but it wasn’t really until listening to his radio shows that I truly understood the depth of his appeal. He was a fixture on radio from 1931 for the next thirty years in one capacity or another. His shows are the nearest I've heard to the Jack Benny Program in terms of comedic quality, and with his cast of familiar foils like announcer Harry Von Zell and the “Mad Russian” Bert Gordon, Eddie gently sends himself up and gets himself into typically silly situations. However, it is in his moments of directly speaking to the listening radio audience, that one gets the sense of the true Eddie Cantor. Unashamedly promoting good causes, always fiercely patriotic and at times even coming across as a bit of a strict father, Eddie at all times shows sincerity, warmth and a real appreciation of his audience. During the war years, his stirring speeches aimed at the troops and the home front are strong stuff, and he's still the only radio comic I've heard to explicitly mention the horrors of the Nazi concentration camps as a reason to fight for freedom and democracy.

Perhaps just being successful at so many different things has resulted him not being remembered as well as he should be, but his talent and effervescence can’t be denied and anyone who can sustain a career spanning nearly half a century, especially in this day and age deserves respect.

Of course, no mention of Cantor can be complete without his music. When I think of Eddie Cantor, the one word that comes to mind is “fun”. His songs are fun, his films are fun and most of all his voice is the very definition of fun. Songs such as “If you Knew Susie (Like I Know Susie”, “Ida! Sweet as Apple Cider”, “Ma (He’s Making Eyes at Me)”, “Yes Sir, That’s My Baby” and all the rest are sung with such an infectious enthusiasm that they still evoke chills and stand out beyond mere nostalgia. That’s the real fun of Eddie Cantor, seeing or hearing him perform as only he could, he truly is the "Apostle of Pep".
Posted by Russell at 15:17