Smarty (1934) - Joan Blondell and the Funny Side of Domestic Violence 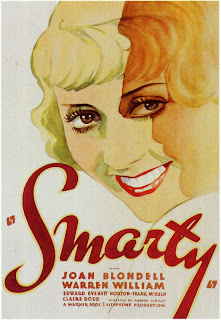 It seems that if you look hard enough at classic movies you find that times, tastes and morals haven’t really changed all that much in the intervening years. We can still recognize most of the staple characters of 30s melodrama - the gangsters, the gold diggers, the hen-pecked husband and the ambitious career woman all still exist in some form or other in contemporary popular culture. Even though the politics and morals of our time have changed, we retain an affinity for these situations because on some basic level they are still recognizable to us. Obviously not all social mores are the same, given that the representation and treatment of minorities, though rarely hateful still leaves us with a sense of unease and the assumption and or hope that society, has in some way moved on. Smarty falls firmly into the category of belonging to a (hopefully) bygone age in so much as it is a rip roaring comedy about the hilarious subject of, er… domestic violence.

It’s an odd choice for a comedy to say the least, and the result is bewildering clash of high drama and low gags. As usual for a Warner Brothers production of the mid-thirties it has an excellent cast, a sharp script, and a fine (and under rated) director packed into a brisk 65 minute length. It starts with bickering couple Joan Blondell and Warren William well…bickering. She teases and belittles him in a frankly nasty way until he becomes “impotent with rage”. An innocent night of bridge with friends Claire Dodd, Edward Everett Horton and Frank McHugh (playing their usual screen characters: Dodd is acid tongued, Horton is jittery and polite and McHugh is a bumbling simpleton) descends into fight night when Joan pulls the trigger with the words “diced carrots!” and Warren William is pushed about as far as a man can be pushed. He smacks her full on the face and seethes with his no longer impotent rage as she runs away in terror. All well and good for the start of a comedy, as you would expect.

If smacking around your back-talking wife wasn’t bad enough, the reaction to the deed is what really labels the film as a "period piece". Horton is outraged and shocked but is told by Claire Dodd that it’s only because he’s being too “virtuous and noble” because, uh... that’s a bad thing I guess. She continues with the immortal, only in the pre-code thirties line “A good sock in the eye is something every woman needs. At least once in her life” While Horton, and the modern audience pick their collective jaws up off the floor, McHugh (up until now the comic relief) chimes in that “there’s a lot in what she says” With that sagely advice, the motion is carried two to one, she deserved it.

Cut to poor Joan Blondell who is well, not really that upset about the whole episode. She claims, rather half-heartedly that she “won’t live with a man that hits me” and demands a divorce. You mean to say that the punch heard round the world was just a comedy plot device to get us to a divorce scenario? As this point I was trying, really trying to put myself in the mindset of a 1934 viewer but I was beginning to struggle somewhat. Let me get this right - she gets hit (and not a comedy slap, a real sock in the face), everyone thinks it’s okay and it’s played for laughs so that she can use it to her advantage in a plot to win back her soon to be divorced husband. It’s almost as if the writers knew the Production Code was coming in a few months and decided to see what they could get away with.

But it gets worse. After a cutting remark about Claire Dodd’s promiscuity, (On being asked to keep Joan company she says “I don’t mind strange beds” which gets the come back from Blondell of “If I’m not mistaken it’s a preference”) poor misguided Joan then laments the fact that the spark has disappeared from her marriage (hence the divorce). The reason? “If he really loved me, he’d have hit me long ago” Okay, I’ll admit, she’s an incredibly annoying character but I think I’d just turn to drink to get over my problems. Or maybe that’s just me being “modern” again.

To her credit, despite being so annoying Joan Blondell has perhaps never been lovelier or funnier than in Smarty. The whole film seems designed to show off her shapely form, from the opening shot of her legs to the ridiculously revealing backless dress that causes so many problems later in the movie. Her delivery of the lines, despite being tonally dubious (but that’s a problem with the film as a whole) have a distinct air of the Myrna Loys about them, with cheeky darting eyes and playful inflections. Her courtroom scene, in which she is granted her divorce, is a short master class in comedy as she plays up being a supposed innocent to win over the judge. She is all big eyes and teeth, as only Joan Blondell can do, but with subtle little moments of comic business, like briefly holding up the wrong hand when asked to swear on a bible. It’s a beautifully played scene that is designed to enable her to shine.

We fast forward a year and Miss “Smarty” is now married to Edward Everett Horton and is seemingly having fun tormenting and belittling him in her usual irritating fashion. He doesn’t want her to wear a backless dress so she goes ahead and wears it anyway then invites ex husband Warren William along to the party. She wastes no time in trying to seduce him but it initially doesn’t work out (he thinks the dress is like “lipstick on a child of eleven”) Before long she’s back to her old ways, telling him “I’ve been going to the movies quite a lot recently. There the girls are quite different. They get kicked ‘round and pushed in the face…with grapefruit…and they love it” It may be a funny and knowing wink to The Public Enemy (which also features Blondell – what did she make of seeing her doppelganger on screen, or is that just getting too meta-textual?) but clearly, the girl needs therapy.

Having been spurned by the ex-husband she tries to get the usually unflappable Horton to hit her and, one would assume become a real man. She taunts and dares him, knowing that he won’t do it until he too snaps and slaps her in the face. Somehow, this doesn’t have the desired effect and divorce is on the cards again. She didn’t seem to enjoy it much, perhaps he just didn’t hit her hard enough. No pain, no gain, right? In the end Blondell and William are reunited and Horton is sent on his way (he gets a lucky escape if you ask me). She immediately gets back in the groove and gets smart with William but this time he knows exactly what to do. He tears her dress off, holds her hair back tight and hits her again whilst telling her to shut up. They collapse onto a sofa as he says “If you don’t watch your step, I swear I’ll hit you hard”. As they kiss and disappear out of view she replies, “Tony dear, hit me again”

If we briefly ignore the complete and utter wrongness of the central premise, Smarty is a smart little film. The thing is, to a modern audience the central premise just can’t be ignored. Surely most people, even in 1934 couldn’t have thought that all women deserve to be slapped around a bit and that a man wasn’t a man until he did so? And what for me makes the movie all the more unnerving is that this frankly insane idea is played for laughs. Laughs? Okay, I’ll admit that the threat of domestic violence has been used for laughs before, such as in The Honeymooners, but Ralph never actually hit Alice did he? Throwing custard pies, plates or shoes at a woman may be funny, but throwing fists is not (and actually seeing the blows is even worse). Comic violence of this sort traditionally always happened off screen to the sound of bangs and crashes. Maybe I was being rather modern about it all but who on earth decided to green light this thing?! Or maybe I’ve just grabbed the wrong end of the stick entirely and like Edward Everett Horton’s character I’m being too prudish and thus missing the feminist subtext. Or maybe not.

As previously mentioned, sometimes times change for the better. Domestic violence is wrong folks, and even when played so enticingly by a top notch cast of beloved Hollywood icons. In the UK, the movie was called Hit Me Again, which in a true British manner, rather gets straight to the point and hopefully would alert viewers to the horrors ahead. That said, when it’s not being completely morally insane, Smarty is almost a great little movie but sadly also a very, very wrong one. Ultimately it probably says more about male film industry attitudes in the thirties than that of the average man or woman on the street. Despite this, I think several books deserve to be written about whatever issues Joan Blondell’s character has in the movie. Did she get on with her father? Was she hit as a child? Does she feel undervalued as a person? We need to know these things and give her all the help she deserves. Maybe she just needed a cuddle. Actually, I’m not sure I want to know, to be honest.
Posted by Russell at 17:55