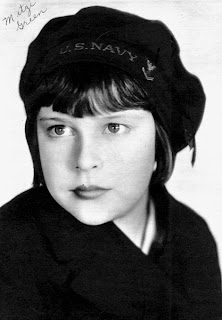 It must have been a tough life being a child star. Regardless of the loss of a carefree childhood, the minute you start to grow up you instantly lose precisely the appeal that made you loved by millions in the first place. Even worse, in years to come all people will want to talk to you about is the work you did as a five year old that you can probably barely remember. Of course some child actors managed to reinvent themselves as fully-fledged stars as adults (mostly by starting as a teenager rather than a child it seems), though a magic formula for success in the transition was continually elusive. However, the vast majority did not make the transition, and once they reached a certain age, packed their bags and returned to civilian life, returning perhaps only for a short lived comeback as a young adult. Mitzi Green followed that pattern as far as her career in movies went, but luckily her talent was such that she crossed over to the bright lights of Broadway and continued to wow crowds throughout those ‘difficult’ years.

Mitzi Green, who would have turned 90 today, was a rather unusual child star in that despite being only nine years old on her screen debut appeared too grown up for a stint in Our Gang yet refreshingly dispensed with the sickly sweet sentiment associated with the Shirley Temples of the world. Miss Green appeared to be that rarity in the land of child actors: the child actor that isn’t precociously annoying. I mean that as no disrespect to the considerable talents of the likes of Jackie Coogan, Jackie Cooper and Shirley Temple but Mitzi Green created a screen persona that was the antithesis to the cliché of the Hollywood child star. She was worldly-wise, self aware, cheeky, manipulative, decidedly annoying (to other characters) and most of all, supremely talented for her age.

Though I’ve currently only seen a handful of her screen appearances (and I’m trying to get hold of more of her films as I speak!), from what I’ve seen she shows confidence, timing, poise and excellent physical and facial reactions. Of course, upon reading about her background this is no surprise. She was born in 1920 to a couple of vaudevillians and appeared in their act from the age of 3 or 4. Her natural talent was for mimicry and impressions and combined with her abilities in song and dance must have brought the house down on a regular basis. This translated very well to pictures and she made her screen debut in 1929’s The Marriage Playground. From her first moment on screen she looks at ease with the new medium.

The Marriage Playground is an interesting early talkie with an excellent cast including Mary Brian, Fredric March, Kay Francis, Lilyan Tashman and Anita Louise. Mitzi plays one of the children in a large family that are going to be split up due to the actions of their selfish socializing parents. With her round face and bobbed hair Mitzi Green stands out from the group of kids (almost a nine year old flapper!) and establishes herself as the brat of the family, cheekily asking everyone she meets for a present. She insults wayward mother Kay Francis about her “rotten taste in jewelry” (the pearls given for a present weren’t big enough it seems) and then puts her foppish boyfriend through his paces by riding him like a horse round the house (saying “Giddup you old nag!”) Later in the movie she dispenses marriage advice to lovelorn Mary Brian due to the fact that she once listened to Kay Francis’ character getting proposed to behind a door. Brian asks her what happened and Mitzi acts it out then innocently adds that after that “I couldn’t hear a thing for the looongest time!”

What’s interesting about her character in The Marriage Playground is that despite the wise cracking, know it all attitude she succeeds in making her character very funny and very appealing. Whether it’s chastising Fredric March’s (thirty-something) wife that “You gotta realize, you’ve lived your life!” or taking her little handbag with her as she shakes her fist at the characters to give them a piece of her mind like a middle aged warhorse wife, she makes every scene memorable and above all likeable. Of course, it helped that she paused to ask for presents first. It’s just astonishing to think that this fully formed little character was only nine and able to seemingly evoke so many reactions from an audience in just her first screen appearance. 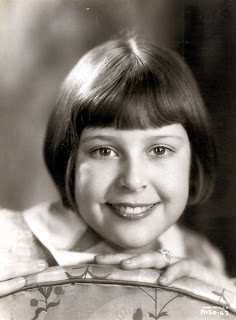 Fast forward a few years and the twelve year old Mitzi Green is starring with Wheeler and Woolsey in Girl Crazy. I’ve already talked at length about the wonders of this film here, so I won’t go into much detail but in this picture we see Mitzi near the end of her career and seemingly in the movie for one reason only, to do her much vaunted imitations. In fact from her first appearance in the movie (as Bert Wheeler’s bratty kid sister) she asks everyone she meets “Would you like to hear my imitations?” The answer is a firm ‘no’, but in the meantime she at least gets to sing and dance a little, annoy the heck out of people and once again dispense advice to the lovelorn. She eventually breaks down their defences and she gets to do her imitations, though we have to wait until almost and hour into the picture for the pleasure.

Without having seen the appearances in between, it seems that by this time her screen persona had perfectly gelled into a well rounded, singing and dancing version of the 1929 one. Her timing, particularly in the bits of comic business she does with Bert Wheeler is excellent and her mannerisms get the most out of the material while also convincing the viewer that there is a real bond between her and her on-screen brother. Despite annoying him, she is always subtly looking out for him, whether fixing his love life, advising him what to do or trying to get him his money from scheming Robert Woolsey.

However, the real highlight of Girl Crazy is Mitzi Green’s famous imitations. Her routine is truly amazing and presents itself as a sort of bizarre and surreal late night cabaret act. The idea is basically the Gershwin tune “But Not For Me” as sung by a number of celebrities. Firstly, Bing Crosby ‘buh-buh-buh-buh’s through it, (only for Mitzi to comically run out of breath to follow up with the trademark whistle) Next up is a stuttering Roscoe Ates, which was pretty funny, but she tops it with her spot on and truly unsettling George Arliss (complete with what looks like an onion ring monocle!) The way her whole body and face change to actually ‘become’ Arliss is amazing and slightly terrifying! Finally we are given another picture perfect imitation of Edna Mae Oliver, complete with all the eye rolling and fussing one associates with her. The whole performance lasts only a minute or two but is a jaw dropping musical and comic tour de force. Disappointingly, she threatens a Maurice Chevalier impression earlier in the film but doesn't actually get to do it. It’s scenes like this that set her so far apart from her child star contemporaries. No need for scene stealing or sentiment, Mitzi was a truly unique talent, but sadly one with a definite shelf life in the movies.

Mitzi only had a few more film appearances before she packed her bags and left for Broadway. It was clear that she had an amazing combination of natural talent and it was not surprising that she found much success there. A movie and television comeback in the early fifties was short lived and she retired to raise her family. Sadly, she died of cancer aged only 48. Had she lived longer, I wonder how much she would have remembered of her days in Hollywood as a child star. Strangely though, seeing how confident and in command of her own talents she seemed on screen, I would like to have thought that it was a clear and hopefully pleasant memory for her. She certainly stood out from all the other child stars and presented a character that while no angel was just smart and sweet enough to win over audiences despite her sometimes beastly behaviour. More importantly, she achieved all this without resorting to the scene stealing, heart string pulling shenanigans of the curly haired brigade. No, Mitzi Green had far too much talent for all that.
Posted by Russell at 18:14