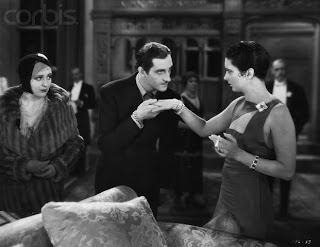 A Notorious Affair is another of those films dealing with the lives and loves of the English aristocracy, a common subject in the early 30s for some reason. This time it is all about pretty English rose Billie Dove and her ill-fated marriage to Italian violinist Basil Rathbone. On one hand this is due to that eternal problem of the ruling classes, that she married beneath her station (I mean, a musician? What would the neighbours say?), and on the other hand that the aforementioned husband has the bad fortune to fall into the man-hungry gaze of a certain Countess Olga Balakireff, played here with relish by Kay Francis.

To say that Kay Francis steals the film would be a vast Titanic sized understatement to say the least. She gets the best lines, the most striking close ups, the most shimmering lighting and the swankiest of fashions. Best of all, you can tell that she knows she has a choice role as she is absolutely, jaw-droppingly outrageous in the movie. As a vamp, she about the closest to a hungry eyed, drooling she-wolf you are ever likely to see. Despite not really being in much of the film, she completely eclipses our nominal star, the rather lovely Billie Dove. It’s not that Dove isn’t good, because she does very well but her saintly heroine just can’t compete against Francis’ vulpine sexual predator.

The movie starts by showing a fox hunting expedition returning to the stables. A group of aristocratic gents with moustaches immediately let us know we are in jolly old England by saying “Wonderful!”, “Topping!” and “Rather!” to each other. No seriously, they actually say this. And what exactly is the object of their upper class clichés? Why, it’s Kay Francis, returning from the hunt and resplendent in top hat (we later find out that she’s “London’s most daring horsewoman”).

Upon dismounting her horse, she suddenly stops in her tracks having spied a youthful stable hand. We get a shot of her face with the most unbelievable look of lust in her eyes. She then checks that the coast is clear, and we see the stable door slowly close. There is a brief pause then the door reopens. Kay and the stable boy are readjusting themselves as she asks his age. He is 28. She replies, “I thought you were a lot older”, as he wipes the lipstick from his face. Satisfied, she walks out and immediately spies the kennel boy. There is another look of predatory lust, this time with a callous smirk. New conquests!

Although the scene is far from subtle (returning from the hunt, now where could we find a metaphor in that?) in a mere minute or two of audacious behaviour Kay Francis has already stolen the picture. In the next scene, Billie Dove declares that she doesn’t hunt foxes but “hunts ideals”. Bah! Who wants that? Miss Dove, you may be pretty with your big eyes but what we really want to see is Kay Francis having her wicked way with a succession of servants and orderlies. In a top hat.

Later, Billie Dove introduces polite society to her new husband, played by an impossibly young Basil Rathbone. Though he plays the part very well, he is lumbered with a ridiculous accent. I think it’s meant to be Italian but it could equally be French or Dutch. I suppose he was just starting out in pictures but it seems utterly mind-boggling to take away one of his biggest assets, his wonderfully rich voice. However, it speaks well for his ability as an actor that he gives a decent amount of depth to the role despite this handicap. Despite the having vocal stylings of Andy Kaufman’s Foreign Man (he has an absurd speech about pushing a horse in a canal “before he bite me”), he is a solid and pleasingly unsympathetic lead.

As for Billie Dove, I refuse to adhere to the received wisdom that a large percentage of successful silent stars were unsuited to sound pictures. In fact I’ve yet to see the sound films of any big silent star that would give that impression regardless of their eventual success or failure in sound (but that’s a subject for another day). Dove is really very good in the film considering the competition she had on screen. In the few close ups that she is given (and this is a problem as Kay Francis is given all the important close ups), she shows much of the charisma she exuded in silent pictures, with her big eyes aglow. Despite working so much better as an actress in scenes needing facial emotions over dialogue, her voice and delivery are fine and she certainly looks lovely. It’s just that in this film, it’s so difficult to cheer on the hero…

Speaking of which, we next see Kay at the party where Basil Rathbone and his accent make their social debut. She looks stunning in a figure hugging sparkly dress, fashionably short cropped hair and long cigarette. Once again her eyes light up when she sees a man (Rathbone) and we know straight away that poor Billie Dove’s marriage is going to be ruined. He tells her about his occupation as a violinist, which gets the sharp retort of “Oh, how awful!” This gets him under her spell, and they part with her promise that “I hope to see you again…very soon”. This line is delivered with a cool puff on her cigarette, and in such a blatantly evil way that frankly all she needs is a velvet cape and a moustache to twirl and we’ve wandered into a Tod Slaughter film. Rathbone remarks that he expected the Countess to talk about horse riding but she talked of nothing but music. Billie Dove’s character retorts that it’s not surprising as “The Countess is very…versatile”. Well, that’s a word for it, I suppose.

Probably the apex of the man-eating comes shortly after the party scene, where we find her in her boudoir after a liaison with her latest conquest, the kennel hand from the start of the film, Higgins. As she (once again) starts to readjust herself after some bedroom gymnastics she looks at the poor man and says, “Higgins, I never knew you had pale blue eyes. I hate pale blue eyes. I never noticed it before…I think I’ll send you back to the kennels where you belong, Higgins” It’s all said with such detached arrogance that right there and then she just invents every single soap opera uber-bitch that would follow. Poor Higgins, he never really had a chance. He replies “Thank you, madame” and it’s back to the kennels for him.

She then moves onto Rathbone’s character and so begins their notorious affair, the details of which I won’t bore you with. Suffice to say it all works out okay in the end (Kay gets annoyed with his violin playing, he gets tired of her constant nymphomania. Well you would, wouldn’t you?). Kay Francis only has a few more scenes but she makes the best of them and the sheer outrageousness of her performance lights up the screen with its incendiary sexuality . It’s a scene-stealing, star making performance on a par with Myrna Loy in Love Me Tonight.

A Notorious Affair is typical of early sound films in that it’s essentially a creaky old melodrama, spiced up with some hints of moral indiscretion. If you take Kay Francis’ Countess character out of the script, then it’s a well-played but rather ordinary film. However, the combination of Francis’ sheer gusto in delivering the most audacious of lines and the director Lloyd Bacon’s obvious interest in shining the spotlight on a rising star lifts the film out of the average. Of course, Kay Francis would go on to become a bigger star and create a believable and popular screen persona but it’s really a shame that she didn’t go on to do more villainous roles. Her aloof, effortless glamour matched with her strikingly dark good looks mark her out as a natural vamp. I don’t think anyone can hold a cigarette holder with as much disdain as Kay Francis. Her early films, much like those of Myrna Loy show a window into a path not taken. And while commercially it was for the best, the occasional dress-up in the top hat would have been a rather fun and diverting change for her and the viewer.
Posted by Russell at 14:53