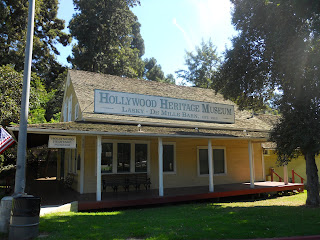 At the end of September I returned for two weeks to dear old Los Angeles for a well earned vacation. I hadn’t been there for seven years and knowing the rate of change in cities a lot less busy than Los Angeles I was fairly apprehensive as to what would await me. Indeed, would any of it still be there since 2004? Los Angeles, in all its wonderful, terrible glory is probably my favourite place on earth. I desperately love the way that round every corner lurks some long forgotten relic of old Hollywood. Behind any boarded up doorway lurks an upstairs room where Rudolph Valentino once danced the tango or Joan Crawford waited tables. Or something like that.

If you look hard enough, the liminal nether world of the past suddenly becomes illuminated and fleetingly alive. Literally every street from the Sunset Strip through to Culver City and beyond positively glows with movie history waiting to be rediscovered. On my first visit to the city this fact largely passed me by, and it wasn’t until I discovered the amazing work of John Bengtson and his frankly astonishing book Silent Echoes that the light went on above my head and I started to look around me. This time around there was simply too much to see and not enough time to see it in. Additionally, I’m not helped by my inability to drive and while I’m no stranger to public transport, it takes a lot longer to get around by bus than just jumping in a car. So, equipped with my two modestly sized legs I made my way across the city.

On my travels I realised that the downside to being more aware of my environment in Los Angeles is that one tends to notice when formerly favourite sights and haunts change, or even worse cease to exist. So it was with heavy heart that I accepted the passing of formerly great dive bars like Cole’s and Boardner’s in favour of their faux-remodeled replacements. Some places, like Clifton’s Cafeteria seemed to be undergoing a worrying refurbishment (I hate the cod 20s style font they have decided to use and what happened to the grotto?) Others, such as Trader Vic’s at the Hilton, have gone altogether. That is life, as there is nothing achieved without progress and we must always be looking forward. As much as I’d like to invent a time machine and travel back to the Hollywood of old, I appreciate and enjoy just as much about the modern Los Angeles too. The problem comes when progress is at the cost of a city’s character and history. It’s a difficult problem, what with money and the intricacies of city politics, but going on the example of bars, I’d prefer a well-preserved original to an upscale approximate recreation. Or to put it another way I would prefer a restored Ambassador Hotel and Cocoanut Grove to the abomination that they built over it.

So, to cut a long story short, a highlight of my holiday was the discovery of the Hollywood Heritage Museum. In fact it’s only really a discovery to me as it has been around for ages, but I find myself almost ashamed to say that I had never noticed it before. And the more I found out about it, the more I liked. Most of all, what is really the most wonderful thing about the place is that in this day and age that it exists at all.

The museum itself is situated inside the Lasky-DeMille barn, which in 1913 was used as an impromptu studio to film Cecil B. DeMille’s feature The Squaw Man. As the fortunes of Lasky, DeMille and the film’s distribution company Paramount grew, the barn became one of many buildings on the expanding Famous Players-Lasky lot. Later it was moved from its home on the corner of Selma and Vine to the Paramount Studios lot on Melrose Avenue where DeMille kept it as a sort of keepsake of his early years and where it eventually became used as part of Paramount’s Western backlot. After DeMille died the studio struggled to find an excuse to keep it and it was eventually moved back to Vine Street to rot until it was rescued and restored by the Hollywood Heritage people, who moved it to its current location on Highland Avenue.

The story of it’s near destruction and eventual restoration seems to have been a long and arduous journey but keenly emphasizes the struggle faced by preservation organizations when trying to save a historically important site from the wrecking ball. What’s more, the age of the structure (it was built in 1901), its importance in film history and the story of it’s revival makes the structure neatly emblematic of not only early Hollywood and movie history but of the ongoing process of architectural and historical preservation.

All this and a lot more is documented inside the museum, generously illustrated with many rare photographs telling the complete history of the barn and it’s occupiers. Also inside is a selection of photographs and postcards showing the sights and wonders of early Hollywood, with an enlightening emphasis on the pre-moviemaking era. Of great interest to me was a selection of ephemera from the great night spots, bars and hotels of the golden age (and in the gift shop they even sell authentic Brown Derby coasters, salvaged prior to it’s demolition!)

The museum also has a number of cool DeMille movie props and memorabilia and as well as a nice display profiling all the major stars of the silent era. Add to that is a corner dedicated to Rudolph Valentino and Valentino memorabilia, film shows (with a mini cinema), displays of relics from a few buildings they were unable to save and a spiffy reconstruction of Cecil B. DeMille’s office at Paramount. I spent a good few hours looking around the place and recommend it highly to anyone with a love of early Hollywood. In fact, there really is no other place in Hollywood where you'll even hear mention of half this stuff. The museum should be a required visiting spot for all local schools if I had my way.

What’s more, the guide on duty the day I visited (George) was very knowledgeable on the subject of Hollywood history and answered my many, many questions with enthusiasm. He recommended historical places of interest to visit in town and when I mentioned I was going next to Larchmont Boulevard for some location spotting, offered to drive me there as the museum was closing up for the day. The ten minute journey turned into an hour long impromptu tour of the homes of the silent stars in the Hollywood Hills and Hancock Park which was unbelievably kind of him and definitely one of the highlights of my vacation. Now, that’s service for you!

Of course, the museum is just a part of the work of Hollywood Heritage as a look at their website attests. Of special interest is their top ten most endangered Hollywood sites, an eye opening account of the struggles to get politicians to recognize the importance of preserving Hollywood’s rich history. While it’s great to see the work they have done, losses like The Ambassador Hotel are a depressing reminder of the reality of change and city politics. It baffles me that a city like Los Angeles, and especially Hollywood finds it so difficult to commit to preserving culturally important landmarks. Most cities would kill to have the built in tourist-friendly history that Hollywood has, yet they want to brush their heritage under the carpet and let it quietly decay. As usual, people will only sit up and take notice once something precious has gone and by then it’ll be too late.

Despite all this, if you are ever in the neighbourhood, you should visit the Hollywood Heritage Museum and support its work. I came away with even more respect for the amazing mix of architectural styles present in what’s left of old Los Angeles and of the organisations trying their best to preserve them. Check them out at http://www.hollywoodheritage.org/
Posted by Russell at 15:35